Despite all the ups and downs, Teen Mom OG‘s Gary Shirley is still on good terms with his ex Amber Portwood, the mother of his 11-year-old daughter Leah. They are so good right now, in fact, that on tonight’s episode Gary drives her to the airport to pick up her new beau Dimitri Garcia. He also has a gift for the new lovebirds to help with birth control: his personal line of “It’s Gary Time” condoms!

In a sneak peek for the episode Gary’s wife Kristina asks him if he’s had a conversation with Amber about birth control. He says he hasn’t, but he thinks it’s an important conversation to have as she got pregnant with her second child, James, just a few weeks after meeting her last boyfriend Andrew.

Gary revealed his condom line in 2015, and apparently he still has his own stash.

At the time he made his announcement it wasn’t clear how to order some It’s Gary Time condoms for yourself, and unfortunately it’s still unclear how to obtain the merchandise. The mere fact that they exist, however, is amazing. Gary, who currently works as a cop, previously had a t-shirt line as well. 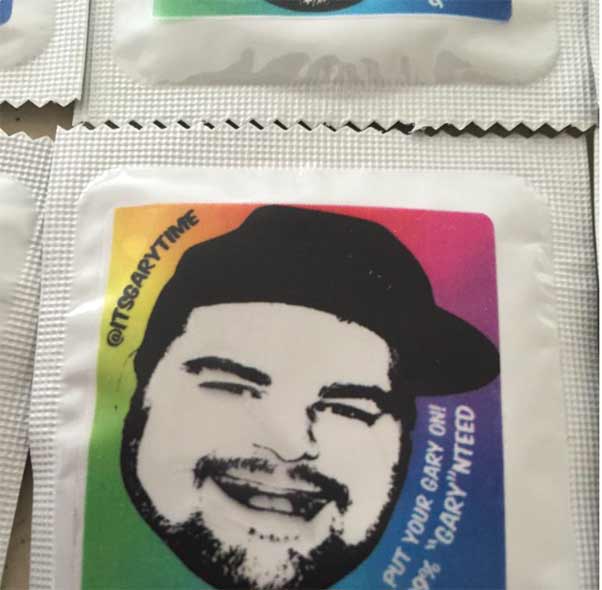 When Amber gets in the car for the trip to the airport, Gary awkwardly brings up the topic. “So, what are you and Dimitri going to do tonight besides speaking love language?”

Amber answers that they’re probably going to cuddle and find a movie with French subtitles, so Gary gets more direct. “Are you doing anything to not get pregnant?” he asks.

“Oh my God,” Amber mumbles. She does concede eventually that she’s “going to need a couple of ‘Gary Times.'”

After they pick up Dimitri and are driving down the highway, Gary, who’s driving, reaches back to Dimitri with a handful of “It’s Gary Times.” Amber’s surprised that Gary actually brought some of his condoms but then gets excited about keeping some as collectibles because she never actually got any of Gary’s personal brand of condoms when they first came out. The average shelf life of a condom is only 3-5 years, so she might not want to use them anyway unless they are currently in production. They are quite valuable as Teen Mom memorabilia, however.