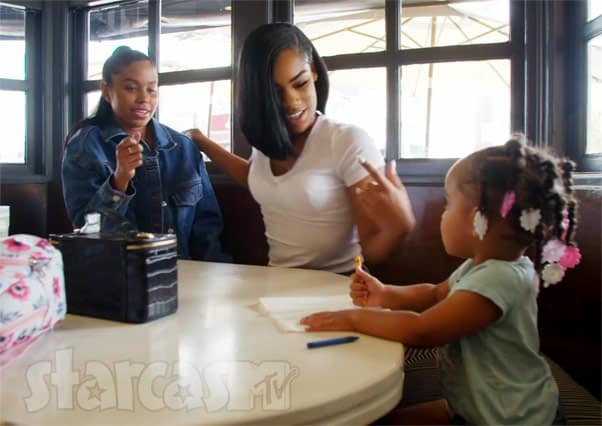 Teen Mom: Young and Pregnant is struggling a bit in the ratings, and MTV looks to be pulling out all the stops to get people to tune in! In a new commercial for Tuesday night’s episode, we see Teen Mom OG star Cheyenne Floyd making a crossover appearance as she offers Ashley Jones co-parenting advice.

Ashley is taking another trip to Los Angeles to meet up with her rapper boo Breezo (aka 600 Breezy), and in the clip (included below) she reveals to the cameras that she and Cheyenne have been communicating for a while. “A few months ago, we started talking online because I really want her advice on how to handle things with Bar,” Ashley says.

Cheyenne meets Ashley and her daughter Holly at a restaurant to chat, and the two share a little girl talk about Breezo. “He’s just a friend,” Ashley coyly insists.

Cheyenne then asks if Breezo has met Holly. “Not yet, but they will tonight,” Ashley replies, before sharing the frustrating back story:

It was not supposed to happen. Bar agreed to watch her, and then, legit the day before, he dropped her off and he’s, like, “If you wanna go down to LA and be with another guy, like, I’m not contributing to that. So, I’m not watching her.”

Cheyenne looks for a little clarification as she asks if Ashley and Bar are together.

“So you haven’t reached a point of, like, boundaries?” Cheyenne asks as Ashley shakes her head “no.”

Ashley praises Cheyenne and her ex Cory and brings up the fact that both of them have had significant others since their split without all the fireworks and drama.

Cheyenne points out that it wasn’t easy for them either. “When we brought other people in it was hard. You’re never one hundred percent going to feel good about it. But, I would say our communication is really good. We pick and choose our battles, and if it has nothing to do with me, then I don’t really care.”

Ashley agrees. “But I feel like you and Cory have a level of maturity that Bar and I don’t have yet.”

Cheyenne emphasizes the focus on boundaries and iterates that it is a difficult process.

So what do you think? Will Ashley and Bar ever be able to mature enough to have a co-parenting relationship like Cheyenne and Cory? Or are they doomed to a perpetual poop show of arguing, social media pettiness, and arrests?

While you ponder over that conundrum, here’s the preview clip:

On a side note, Ashley’s trip to Los Angeles and Holly meeting Breezo for the first time was a major point of contention with Bar’s mom Shen. Here’s an excerpt from one of Shen’s angry posts about Ashley’s “hook up” and how it put Holly in an “unsafe situation:”

MTV should be ashamed. They need to start running checks on people before they agree to film these innocent babies with them. I’m not putting my baby in a bad situation for no money or storyline period. Wait for it. And u trolls before u start know your facts. We did everything we could i have stayed silent and holly is still a pawn of control. u wanna let every tom dick and Harry hit your business but don’t bring your baby with u to get f**ked in a hotel!!

Perhaps Ashley and Cheyenne should have had another conversation about immature parents? And when can we expect to see Bar and Cory having a man-to-man sit down?

#TeenMom #YoungAndPregnant dad Bar (aka Bariki Elimu Lockettsmith?!) has confirmed that he was recently arrested with a frustrated response to his mom Shen's numerous posts about it. Get a full recap of all the social media drama over the past couple days! https://t.co/prKCUlQ5N3 pic.twitter.com/xPSyXN9212

If you’re curious whether or not the conversation with Cheyenne had a positive impact on Ashley’s relationship with Bar, it doesn’t appear so. Bar was arrested just last month for domestic violence and more after a heated altercation with Ashley. You can click the link in the tweet above for all the details on that mess — and the fallout on social media.

And just last week, Ashley posted a photo of Bar allegedly drunk and passed out on the floor as she went off on him on Instagram.