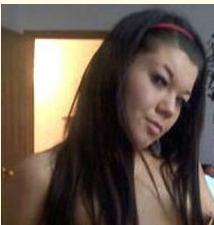 Of course. Amber Portwood, who was most recently seen acting , the fool with her on-again-off-again-court-ordered-to-stay-away-from baby daddy Gary Shirley, had a nude picture leak to Radar Online and egotastic! (click on either link to see the full photo)

You can’t really see everything, but what is really gratuitous about this photo is the tattoo of her daughter Leah on display in all it’s poor freehand glory.

The “source” (a.k.a. Gary?) told Radar online that Amber considers herself a modern-day Bettie Page:

“Amber fancies herself an old-fashioned pin-up girl. She posed the way she thought a pin-up would.”

The peeps on Facebook are screaming “Fake” about this pic, mostly because the tat is on the opposite side of the body from the infamous Star Magazine shot of the tattoo. This is a valid point, but the Star Magazine shot could have been shot in a mirror, and it kind of looks that way. What do you think?