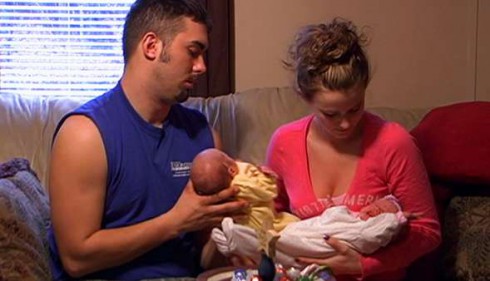 Leah and Corey Simms from 16 & Pregnant and Teen Mom 2 (now divorced) were celebrating their life as newlyweds, when they found that daughter Aliannah was developing more slowly than her twin sister Aleeah, and doctors are currently unable to tell exactly what’s wrong (according to this week’s US Weekly).

She is unable to take weight on her legs like her sister, and her arms are shorter than normal. She also has vision problems that are corrected with glasses.

Aliannah was in the breach position and both twins had to be delivered via an emergency C-section, so complications from the birth may have lead to the current problems Aliannah is experiencing.

A family friend told OK Magazine that as of January 2011, doctors are still perplexed by Alianna’s condition, but there is some speculation from the docs that Ali’s position in the womb contributed to her condition. A battery of tests have been run to check for a wide range of conditions including “congestive heart failure, lymphedema, and cancer,” and she’s been checked out by a neurologist.

From what we see on the show (that was filmed a year ago, January 2011) baby Aliannah is making great strides. She’s been seeing a geneticist, an ophthalmologist, and other specialists; undergone two MRIs, and thankfully they’ve been able to rule out a lot of scary illnesses. There is nothing wrong with her brain, but one of her optic nerves is smaller than the other. Ali has also been able to stand up, and should be able to walk! Physical therapist Hannah said that Ali should be able to walk because “structurally we’ve ruled out any problems with that.”

The geneticist first thought Ali had campomelic dysplasia, a life-threatening disorder that effects the development of the skeleton and reproductive system. The geneticist wasn’t completely able to rule that out, but said in a letter that she had abnormal test results in the genetic tests. They were unable to explain why she was presenting the way she was clinically, and concluded that she has an unspecified kind of skeletal dysplasia, also known as “dwarfism.” Right now the geneticist doesn’t have the ability to check for every single condition. Basically this doesn’t mean that Aliannah HAS skeletal dysplasia or dwarfism, but that they can’t rule it out. They’re scheduling Ali for more tests in a year, which would be around now (January 2012.) They’re currently under a wait-and-see program, which is maddening, but thankfully the worst conditions have been ruled out, and baby Ali has been able to stand by herself and make other developmental strides.