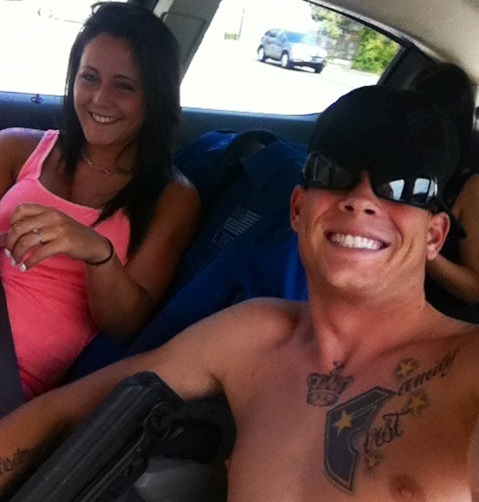 Jenelle Evans recently broke up with her fiance, Gary Head, after dating him for nearly 7 months (sometimes constantly on-and-off.) Jenelle has previously alleged that Gary was physically abusive with her, and now the Teen Mom 2 star’s best friend, Allison Lester, is speaking out about Gary’s drug use and regular assaults on Jenelle.

“When Gary is in one of his jealous rages, he gets scary insane,” Allison tells Star magazine. She recalled several different incidences where Gary would push and even strange Jenelle — in front of her two-year-old son, Jace, and claims he would even squeeze her face, causing “her ears to bleed.”

“The abuse Jenelle suffered at the hands of Gary is far worse than anyone could have imagined,” Allison says, adding that she even feared for her friends life! “I’ve had to call the police several times,” she claims. “Another time, Gary put a loaded gun to her head and threatened, ‘I’m going to kill you,’ if she didn’t allow him to look through her phone.” According to Allison, his rage stems from his chronic Percocet use: “He snorts Percocet all the time.”

Gary denies all accusations but what he can’t deny is the photos of him snorting something off of Jenelle’s kitchen table. Gary’s defense? “I’ve been in the Marines for three years and get drug tested regularly, so I don’t know how [snorting Percocet] would even be possible.”

Jenelle and Gary were both arrested after an incident on June 24 in which he allegedly “beat the s**t out of her” and tied a bed sheet around her neck, attempting to strangle her. When Jenelle tried to fight back, he snapped, “If you’re going to throw like a man, you have to take it like a man,” recalls Allison.

Jenelle was in court last week where she filed a no contact order against Gary. Meanwhile, he continues to attack Jenelle the only way he can — on Twitter.

Jenelle Evans timeline of events since her heroin arrest

Brooke Wehr posts nude photo of Jeremy Calvert, confirms they are back together