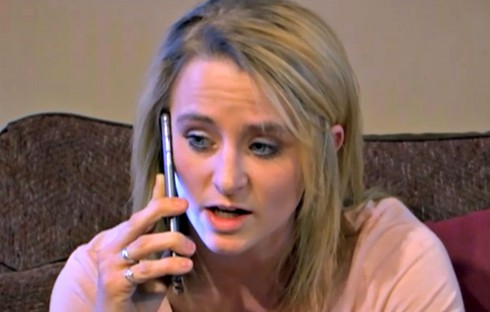 There are still two days until the next episode of Teen Mom 2, but MTV helped whet our appetites with a new round of preview clips for Chelsea Houska, Jenelle Evans, Leah Messer, and Kailyn Lowry. Take a look:

The clip for Chelsea really doesn’t feature her at all. Instead, it’s a look at a rare daddy-daughter date between Adam Lind and Aubree, plus one of his friends/drivers as the third wheel.

Although Adam and Chelsea certainly have their share of custody problems, the drama in the clip is between Adam and the mother of his second child, Taylor Halbur. What’s a dad to do when he wants to see his kid? Dangle his other child’s heart on the line! After teasing Aubree with the possibility of getting to see Paislee that day, he has her call Taylor to ask about getting together. Taylor is sweet about it, but stands her ground. Oh, and the skate date was a bust because Aubree was nervous about getting on the floor. Whomp-whomp.

Alternative title for Leah’s clip: “S**t Hits the Fan.” Daughter Aleeah was sick and needed to visit the doctor, so Leah wasn’t able to take her to school or Ali to her physical therapy appointment…which Corey’s wife, Miranda, found out when she checked in at the school.

Unfortunately for Leah, she also chose that day to tell Corey she didn’t want to give him custody throughout the week–because she wanted the girls to have a “stable place.” Corey then called Leah out:

“Get your sh*t together and do what you’re supposed to do and there will be no issues,” he said. “You’re a fake a** mom right now.”

The phone conversation just goes downhill from there — with Corey saying the girls tell him they hide in the closet during Leah and Jeremy’s fights. This leads Leah to say she won’t give him any more custody without a court intervention.

Jace has been acting out in school, so his teacher wants a conference. Jenelle hoped to call in, as she was tied up with classes, but first she had to talk to mom Barbara. Predictably, that didn’t go well.

“Because we’re going to court, you can’t see Jace right now, because I have to make sure that he is not going to get upset,” Babs said, that explaining she hired a lawyer.

“I want to know why some weekends it’s ok for me to have him, but then the second you get pissed off, you hold him from me,” Jenelle fired back. “When I get custody of Jace back, you will not see him for as long as you f*cking held him from me for.”

After returning from Los Angeles, Kailyn was not excited to see Javi, which she explained to her friend: “Now I’m upset because now I have to go home to him. I literally don’t even want to go home to him because I’m so upset about this.”

After that, she called Javi and said she didn’t know if she could face him because of how he’s “ruining friendships.”

Jenelle Evans’ larceny charges against Nathan Griffith to be dismissed