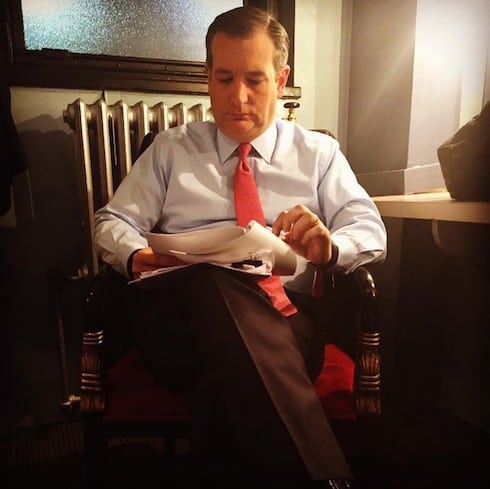 Ted Cruz, Texas’ junior senator and a man so thoroughly disliked by his colleagues that no one wants to be his secret Santa, is in the news this morning because someone in his office liked a two-minute p0rn clip on Twitter. Adult film account @SexuallPosts shared the clip–originally uploaded by Reality Kings–early on September 11th. Late in the day–maybe because he thought no one was watching?–Cruz’s account made the clip its 1,248th like. (The account has since un-liked the tweet, but you can see a mostly SFW screencap here.)

But it turned out that people were watching, and the story quickly went viral. Enter Craig Mazin, Ted Cruz’s college roommate, who went viral during the 2016 presidential primaries by sharing details of Cruz’s thoughtless masturbatory habits from their freshman year together at Princeton. Mazin has a bunch of writing and producing credits to his name; he’s probably second-best-known for writing the second and third movies in the Hangover franchise, along with Scary Movie 3 and 4. But he’s best-known for calling Cruz a “huge a$$hole” and mocking him on Twitter–which he did, with vigor, following the p0rn controversy.

Now imagine Ted Cruz is doing this four feet below you in the bottom bunk bed.

Yes, my misery very much appreciates your company.

I never wanted this for any of you. I thought maybe I'd feel better if two or three people knew. Not six billion. That said? I FEEL BETTER.

Mazin also gave birth to the delightful new euphemism “handle the delegates,” which will hopefully become the “master of your domain” of the early 21st century.

If "delegates" is a euphemism for Ted Cruz beating off in our frickin' room, then yeah… I COULD NOT HANDLE THE DELEGATES. https://t.co/K3TKvWfrRU

And he kept the zingers coming for would-be detractors, too:

Yeah. I guess Ted and I peaked on the same night. https://t.co/xIf6MEKSmX

Ted Cruz thinks people don't have a right to "stimulate their genitals." I was his college roommate. This would be a new belief of his.

On a related note, though Cruz has since un-liked the p0rn seen ’round the world, the account from which he liked it has since immortalized Cruz’s participation:

Thanks for watching ted!