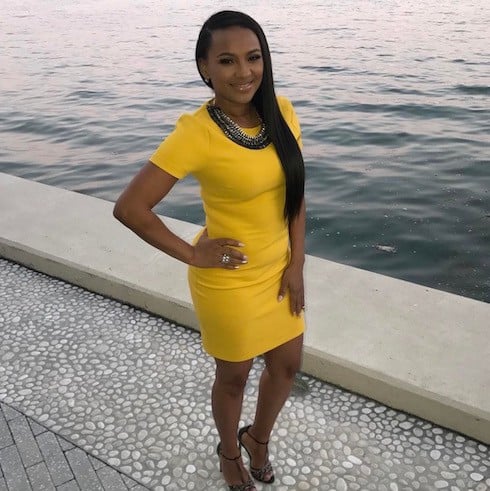 Because Peter Gunz has ten babies (and counting), and because LHHNY is really, really good at drawing out any and all baby mama drama, stories about Tara Wallace pregnant again have become common fare over the past few years. Peter’s endless love triangle with Tara and Amina Buddafly came to a head after Season 6 ended, when both women disclosed that they were pregnant with his children with a few months of each other.

That drama wasn’t a major component of Season 7, though, and it appeared as if both women had had their fill of Peter. Now, in to a new interview with VH1, Tara herself confirmed that her uterus is pretty much closed off to Peter–and suggested that she’s let things play out for as long as they have in part because the of the financial rewards the network dangled.

RELATED: Peter Gunz is trying to rekindle that old flame with Tara Wallace, who appears receptive

“Our storyline is just so intense, you just can’t help but be affected by it, emotionally,” Tara said. “For me, when all of this happened, even though it’s been quite some time now, we have taken our story and it’s become a source of our income. So there hasn’t been a period of time when we haven’t had to address it.”

Tara also said she didn’t feel bad for Amina after Peter told her he really wanted Tara at the Season 7 reunion–because, as Tara put it, Amina had always the clearest picture of the situation with Peter. “Coming into Love & Hip Hop,” she explained, “the one thing that [Amina] knew was that they were married and I didn’t know. For both of them to go into the situation, knowing that I didn’t know that and thinking that would be okay to expose that on television. I don’t feel bad for her….These things are life altering; it’s not a little fight or spat.”

RELATED: Peter Gunz asked Amina Buddafly for a divorce without getting a commitment from Tara Wallace first

As for the question of whether she’s currently pregnant, Tara can only shake her head. “It’s like, geez, guys,” she said, “how many babies can I have in one year?…Like, it’s a slow news day, let’s just [report] that Tara’s pregnant because she hasn’t lost all her baby weight.”

Tara did also add that she’s completely done having children, whether by Peter or anyone else. And it sounds like she might be done with Mr. Gunz, as well: “My life is not just about fighting over Peter, or just about what’s going on between me and Peter.”

VIDEO Tara Wallace and Amina Buddafly brush haters aside, bring their kids together for adorable playdate