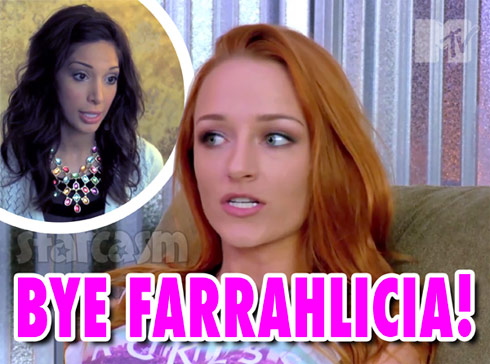 On the upcoming episode of Teen Mom OG the producers reveal to the cast that they are bringing back Farrah Abraham, and Maci Bookout, for one, does not take the news well. In a new extended preview clip, Executive Producer Morgan J. Freeman himself breaks the news to Maci, who is shocked at first, then reveals that if Farrah is coming back, she is quitting the show.

And in case you couldn’t watch the video for whatever reason, here’s the transcript:

MORGAN J FREEMAN: So I wanted to talk a little bit about, um, there have been some conversations going on that is kind of a big shift to the show. And we made the decision to bring Farrah back.

MACI BOOKOUT: [Her eyes widen as she stares back in shock and silence] You’re lying.

MACI: If this is true, I’m done. I’m not doing this any more.

MORGAN: If you guys were all living together, or best friends, or working together, I’d understand, but because the show shows four completely different experiences, you’re able to see how decisions manifest in different ways.

TAYLOR McKINNEY: I think what Maci’s getting at, too, [to Maci] correct me if I’m wrong, everything that she’s trying to build and the message that she’s trying to portray: that being a young mother is hard. She feels like that every time she takes a step forward in that, when she’s linked to Farrah, it brings her two steps backwards.

MACI: Absolutely! And I’m actually, really mad. Actually, my feelings are hurt. Really. I think this is bullsh*t.

MORGAN: The intent was not to hurt your feelings.

MACI: Well, I mean, it’s the last reaction you’re going to get from me, so — I mean, at least you got a good one.

MORGAN: I’m going to attempt to do whatever I can to try to convince you otherwise.

MACI: I’m not doing it. You’re not going to talk me into it. There is no discussion. We don’t need a second to talk, we’re on the same page. This is it. I’m p!ssed off! I’m really, really mad. And then, as far as I’m concerned, you guys can leave now. This is over. I mean, I’m done.

So does Maci actually quit the show mid-season, or does she continue filming? We found out the answer courtesy of the synopsis for the following Teen Mom OG episode airing May 4 titled “First Time for Everything:”

Maci agrees to return to the series, but has conditions regarding Bentley; Catelynn and Tyler struggle with parenthood; Farrah introduces her mother to Simon.

And in case you were curious about the “conditions regarding Bentley,” we broke the story back in February that Maci was not going to let MTV film Bentley if they brought Farrah back, so we assume that will be the (extremely harsh) condition. It’s a helluva drag (we LOVE us some Bentley yo!), but we should remain positive and regard the confirmation that Maci won’t be quitting as having our collective glass one-eighth full.

On a side note, fans will finally get to see Maci and Farrah together for the first time on next week’s after show with host Nessa, and judging from this preview clip — despite Farrah’s observation to the contrary — it’s going to be SERIOUSLY awkward: