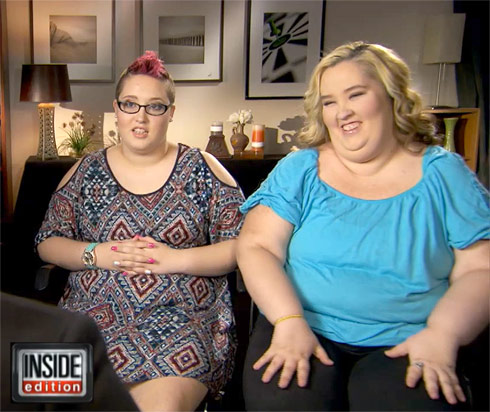 Can you say “Here Comes Honey Bi Bi?” Former Here Comes honey Boo Boo star Lauryn “Pumpkin” Shannon has revealed in a new interview that she is attracted to both men and women. But, Pumpkin didn’t stop there! She also outed her mother, Mama June, as being bisexual as well!

Here’s the clip from Inside Edition:

We then see Pumpkin and Mama June sitting beside each other and Pumpkin says flatly, “She’s gay too. June is gay too.”

“This show’s about me coming out, “Pumpkin says as Mama June laughs, “but June has came [sic] out too!”

The interviewer then asks, “June, are you attracted to women and men?”

“I have, yes,” Mama June says. She later adds, “I’m not gonna lie, I’ve played in the minors but I’ve never went pro.”

Pumpkin begs to differ. “Yeah, you did go pro,” she says.

The interviewer asks what that means, but we don’t get an answer from either Pumpkin or Mama June, instead the clip narrator says that the translation is that Mama June has “fooled around with women, but has never had a real relationship with a woman.” (I’ll need to remember to update the Redneckipedia.)

“You live in a very conservative part of the country,” says the interviewer.” Are you afraid of people’s reactions?

“I look at it this way,” Mama June replies, “haters are gonna hate.”

It’s revealed that Pumpkin is currently single but that she is currently trying to get back with an ex-girlfriend.