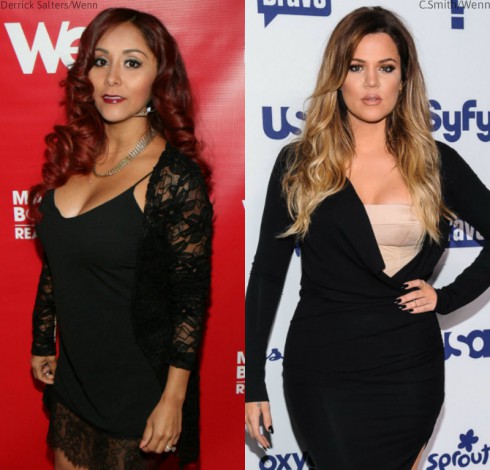 Cat fight? Leopard-print lovers Snooki and Khloe Kardashian easily could have gotten into it this week when the Jersey Shore star recalled Khloe’s rude attitude at their first meeting…

“I always root for Khloe, but I just remember that one time I met her and she was really mean to me,” Snooki said in her weekly “Nookie with Snooki” video. “Her mother was really nice to me, but Khloe was like ‘What the f**k is she doing here?’ Like, right to my face!”

Snooki said she (naturally) took the reaction to mean Khloe didn’t like her. But, despite the diss from Khloe, Snooki took the high road by standing up for the Keeping Up With the Kardashian star’s new relationship with French Montana: “After all that drama she went through, I’m glad she’s happy… But the media’s putting too much pressure on these two. Let the girl live and enjoy her single life!”

After Snooki posted the video, Khloe took to Twitter with a reaction/semi-apology.

@snooki had no idea you thought I was mean to you. Sorry boo!!! You and I are leopard soul sisters. Wishing you love and happiness

Looks like all is forgiven between the two… And now Khloe knows that saying “what the f**k is she doing here” to a person’s face isn’t a good first impression.

Are Khloe Kardashian and Lamar Odom getting back together?