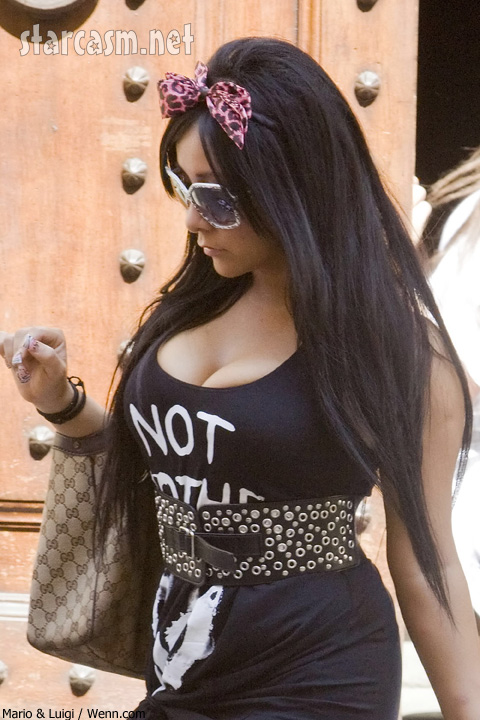 Snooki Polizzi posted photos of a thinner self this April on Twitter right before she head off to Italy with the rest of the Jersey Shore crew. She said she’s been working out regularly and laying off the booze to drop a few pounds. The former 100-lb, 4’9′ reality star weighed around 126lb. last summer after binge drinking and indulging on high-calories foods like fried pickles. Now she’s down to about 109, (click here for before and after photos) thanks to a diet pill, Zantrex-3, which is pretty much a caffeine mixed with herbs like ginseng. Snookie has gone on a variety of fad diets before, including the “Cookie Diet.”

Snooki, who probably has a promotional deal with Zantrex-3, talked exclusively to Star magazine about her success with the drug. She supplemented the high doses of caffeine with self-motivated workouts which consists of:

“at least an hour of cardio, and then I probably do 2,000 crunches. I also work my butt with the exercise balls and do strength training.”

Snooks says that the pep pills give her energy to work out, and curb her appetite, but don’t make her feel shaky. She also says that she’s eating lots of grilled chicken and salads. The interview was given before she got on the plane for Italy, and the pint-sized star said she had more mature plans for this trip. Instead of “blacking out and getting arrested,” Snooki says she planned to spend most of her time sightseeing in Florence.

Not sure how much culture Snooki has been taking in, but she’s now been there a while, hasn’t been photographed drunk yet. She’s basically just been hanging out and shopping with a very svelte looking Jwoww and the rest of the girls. In fact, the worse trouble she’s been in is pulling her groin while “kicking her height.” The boys aren’t behaving as well, though. Ronnie and The Situation got into a physical brawl that ended in a trip to the hospital.

The health concerns associated with Zantrex-3 appear to be the same health concerns with any high-dosage of caffeine. Pregnant women should be cautioned from using it, as well as people who suffer from Glaucoma, heart conditions, anxiety, diabetes, and bleeding disorders. Also, taking diet pills, uppers, or just drinking too much Redbull and/or coffee while not eating enough can make your pretty crazy. It’s best to lose weight slowly by eating healthy and exercising.