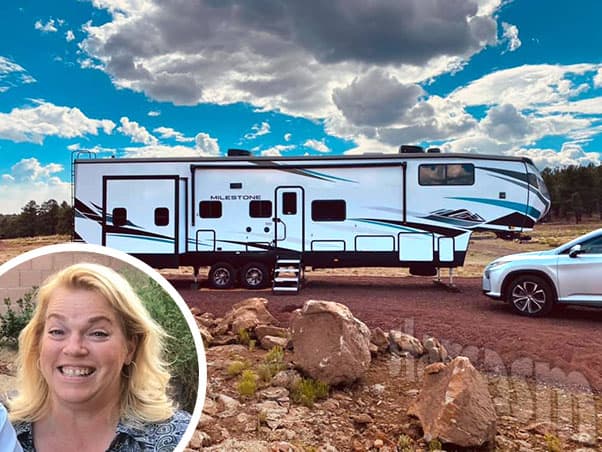 I think we can all agree that Janelle Brown is the most practical of all the married adults in the Brown family from TLC’s Sister Wives. The polygamous reality star demonstrated that fact once again after the house she was renting in Flagstaff was sold by the owner.

Janelle was facing skyrocketing housing prices, no rental properties available, and the potential for actual home construction on Coyote Pass remaining just a distant dream. So what did Janelle do? She bought a fifth wheel camper to live in!

Not only does living in a camper solve all the problems listed above, it also hedges against two other potential Brown family issues: the inevitable impromptu move to another state and the bickering over home placement on Coyote Pass. This is brilliant!

Janelle shared the news on Facebook on Saturday, along with a photo of her new digs. “So I have something fun to share,” Janelle began her announcement. “I acted boldly and seized an adventure. The rental where I was living was sold and I chose an alternative path to trying to find another rental. Not only is the housing market in Flagstaff as crazy as where you are I’m sure, rentals are even harder to come by. Presenting my new summer adventure – the RV life but camped on our property.”

Kody’s second wife continued by explaining that living on Coyote Pass would make any work that she needed to do there that much easier. “Lots to do out here on the land so I figured why not be onsite.”

Janelle admitted that her excitement is also tinged with a bit of anxiety. “Honestly I’m alternating between extreme excitement as I’ve always wanted to try this and anxiety at all the unknown variables,” she revealed. “So stay tuned, this is about to get real!”

The response to Janelle’s post was OVERWHELMINGLY positive as hundreds of commenters applauded her decision. The most commonly asked questions were in regards to the practical aspects of living on Coyote Pass in a camper like sewer, water and electricity. Janelle didn’t answer the questions, but I’m guessing they’ve got all the necessary hook ups. Especially since it appears that the camper plan may have been in the works for more than six months!

UPDATE – Janelle shared the camper announcement on Instagram on Sunday, and she responded to a couple of comments, including this one:

COMMENT: Smart idea, did y’all get it zoned for RV’s I thought I read somewhere from someone that the property wouldn’t allow this?

JANELLE: You can apply for a permit which I did of course

Janelle seemingly teased the transition to the camper life back in December. “@robertthebrown has bought an old camper trailer and has undertaken the big project of refurbishing it,” she captioned a photo of Robert working. “It has surprisingly been of interest to Gabe as well. They have spent quite a bit of time this week working on it. I’m really excited to see his finished project.”

Earlier this month, [Janelle’s son] Robert shared a series of photos on Instagram that showed the AMAZING makeover of the interior of the camper. “Livin’ in a van down by the river,” he joked in the caption for the gallery.

Here’s the gallery, including a rather hilarious last image:

I am assuming this is the same camper that Janelle will be living in.

If you’re a bit camper illiterate (like me) and you’re curious what kind of living space the one purchased by Janelle has, here is a sample floor plan from a camper made by the same company:

CONGRATULATIONS to Janelle! I’m really looking forward to watching her and her remaining kids make to adjustment to camper life on the next season of Sister Wives. Hopefully it will provide a break from the otherwise quite dark drama that has been playing out over the last two seasons.

Hmmmm… I guess I need to update my projection of what Coyote Pass will look like in the year 2073: 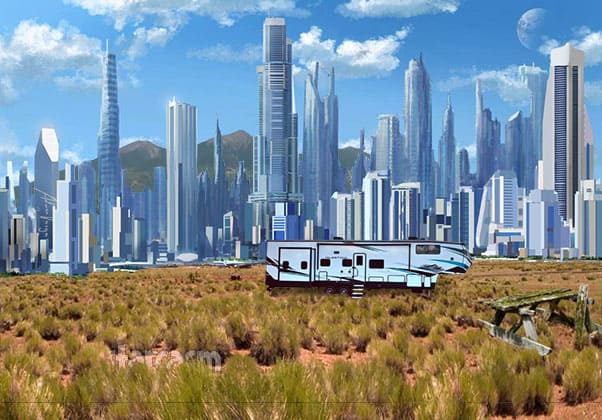 All Coyote Pass joking aside, if you’re still confused by how the property breaks down in regards to who owns what, we did a complete analysis for you:

The #SisterWives' #CoyotePass property is multiple parcels in widely varying sizes. Find out how many acres & what % of the total purchase price each wife owns. Plus, how much did Robyn & Christine's houses cost? And how much do the Browns owe in total? https://t.co/QWjltaJjKX pic.twitter.com/aALqLjoCuS