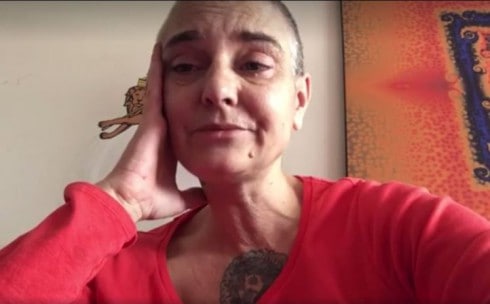 Sinead O’Connor has been very open with the public via social media about her immediate and dire mental health struggles. Last week she alarmed millions with a video post from a motel where she revealed she’s been having suicidal thoughts for the past two years and is distraught over being estranged from most of her family.

Many people rallied behind the singer, including fellow artists Annie Lennox and Fiona Apple. She posted her initial message with the hashtag #OneofMillions, and indeed millions of people around the world do struggle with the thoughts, feelings, and situations Sinead O’Connor so candidly described.

Friends stepped in and the singer was able to receive some medical help. Once she was released, Sinead posted an upbeat update to Facebook, calling the week the “most beautiful” in her life. Soon after she posted that video, however, the tides turned again–and Sinead is back in a very dark place.

“I’m totally destroyed now again, I’m going to have to go back to the hospital,” she said in her most recent video. “I haven’t been able to sleep all night. Nightmare.

“I’m just not able to make it outside of hospital,” she continued. “Gonna have to head back without the iPad, which is a difficult thing. This is unbearable. Absolutely fucking unbearable without my children, my loved ones. Can’t manage to live at home. But I’ll be ok because the hospital is lovely. The ambulance is on its way to get me. So here we go a-**king-gain.”

She also softly sang a heartbreaking rendition of “Tomorrow” from Annie.”It’s so awful to be so crazy,” she said of her condition. “A painful thing.”

She followed up with a text Facebook message: “Gotta go back to hospital. For fear will swallow all the stupid meds they’ve sent me home with. Such is life.”

It’s heart-wrenching to see Sinead share these parts of her life so openly, but this is also a part of life for many people that isn’t often shared. Asking for help on a such a wide level has helped her gain access to resources for mental health and hopefully set her on a path to a more manageable life–and has created the opportunity to have more honest conversations about mental health.