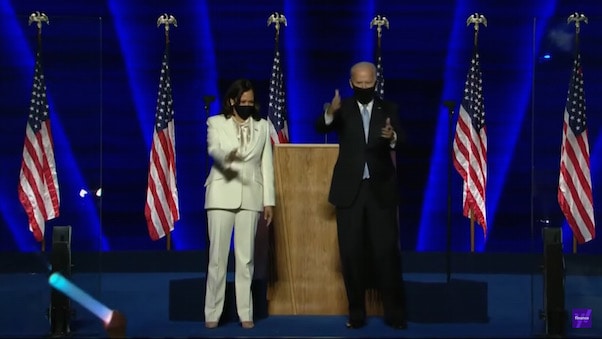 CELEBITCHY – It turns out that the Biden Harris victory in the 2020 Presidential Election was both a lot closer than what most of us expected and also not that close at all. Though America’s current president is disputing the result because it doesn’t favor him, it looks like Joe Biden and Kamala Harris will have won with around 306 electoral votes and a popular vote majority of at least five million

VOX – Kamala Harris represents at least three major firsts: she’ll be the first woman to serve as Vice President, as well as the first Black person and the first person of South Asian descent

JEZEBEL – Returning to America’s current president (for one of the last times): Donald Trump’s presidency came to an ignominious end in the parking lot of a lawn care company over the weekend. By all reports, he’s been watching TV and shouting ever since

DLISTED – CNN anchor Anderson Cooper apologized for calling Donald Trump an “obese turtle, on his back, flailing in the hot sun” after Trump’s pitiful Thursday night press conference — something that Cooper did not have to do, because his simile was startlingly accurate, but that he did anyway

LAINEY GOSSIP – Joe Biden may have won the presidency, but MSNBC anchor, numbers guru, sleepless wonder, and newly designated snack Steve Kornacki ran away with the race for America’s heart

THE BLAST – In a segue back to celebrity news, Lizzo celebrated the Biden Harris election by jumping on her jetski shouting “BYE BITCH!” as she sped across the water

THE ASHLEY’S REALITY ROUNDUP – Flip or Flop‘s Christina Anstead has some words for people who’ve accused her of being an absentee mother during her divorce from Ant. (“Absent mother” is also kind of a tough one to throw in the middle of a pandemic, when there’s plenty of evidence of parents *wishing* they could abandon their kids for even five minutes)

GO FUG YOURSELF – Why yes, I do want to see a great picture of Grace Jones and Dolph Lundgren; thank you for asking!