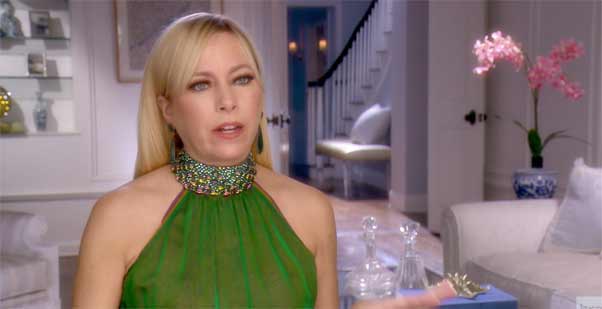 Current “friend” and possible future Housewife Sutton Stracke was introduced to Real Housewives of Beverly Hills with quite an impression. She brings Lisa Rinna to the NYC apartment of Domenico Dolce and reveals that Dolce and Gabbana send her a tiara every year for her birthday. This kind of attention, custom perks, and access signal she’s probably made quite a personal contribution to the Dolce and Gabbana empire.

“Sutton’s ex-husband is into hedge funds, who knows, money stuff,” Lisa says in interview. “When they divorced she had no idea she would be set for life. Their homes, private jets, and think there’s a baseball team or two.”

Who is Sutton’s wealthy ex-husband and what does he do?

Sutton actually grew up with her ex-husband, Thibeault “Christian” Stracke, in Augusta, Georgia. The two reconnected later in life in NYC. They married in 2000 and have three children together. They divorced in 2016, and apparently, Sutton got quite a substantial settlement.

In Season 11, Sutton revealed the painful detail that Christian filed for divorce from Sutton on her birthday. They were separated at the time, but Sutton thought they would work things out. He didn’t tell her he’d filed on this day, and even bought her a birthday cake.

She also revealed that there was a time during the divorce when she didn’t have any access at all to money, so she had to get a short-term loan just to have some cash. Sutton offered to give Erika Girardi this same kind of loan after Erika filed for divorce from her husband before she knew about the legal trouble Erika and Tom Girardi were in. Erika declined the offer.

Christian Stracke has worked at PIMCO since 2008, where he is the Global Head of Credit Research and manages two funds. His professional page on PIMCO also includes a blog he writes about topics like investment strategies. Before working at PIMCO, he was a senior credit strategist at CreditSights, was a head of Latin America fixed-income strategy with Commerzbank Securities, and head of Latin America local markets strategy with Deutsche Bank. He got his undergraduate degree from the University of Chicago and served in the Peace Corps as an agroforestry extension agent in Mauritania, West Africa.

Sutton doesn’t have to worry about money for the rest of her life, but she’s using this time in her life as an opportunity to establish her own business endeavors.

Along with potentially becoming a full-fledged Real Housewife, she recently launched her own boutique The Sutton Concept. She’s said on the show that her ex-husband never took her dream of opening her own boutique seriously, so now’s her chance to prove him wrong.

The West Hollywood retail store features curated fashion, art, and decor that reflect Sutton’s personal taste and worldview. On the shop’s website splash page is a large image of Sutton sitting cross-legged and a promise to never be boring.

Why is Sutton only a friend of the show? Does her ex have anything to do with it?

Sutton has said that she thinks she was not allowed to be a “full” Real Housewife this season because she couldn’t show her full personal life but hopes to continue with the franchise and share the rest of her life with viewers. This has led to speculation that her ex-husband may have barred their children from being shown on the reality show.

In an interview with