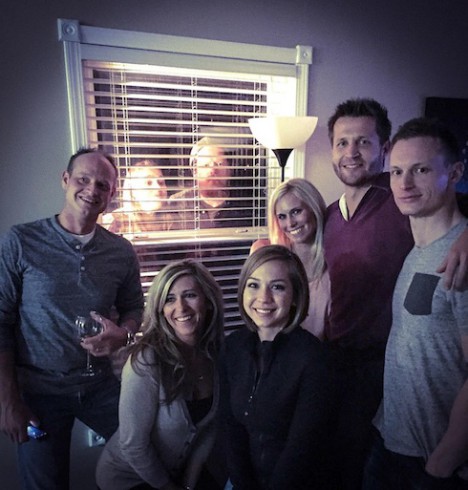 This past Sunday saw the premiere of A&E’s newest reality show Neighbors with Benefits, which depicts the lives and social activities of a small, but dedicated group of swingers in suburban Hamilton Township, Ohio. The show’s pilot episode had a lot of ground to cover, as it introduced us to about a half-dozen “lifestyle” couples (plus one devoutly Christian couple who will serve as the show’s villain), and depicted two major swinging “mixers” with a few assorted dates between couples thrown in for good measure.

Most of the emotional action hinged on the Brittany and Cody, the youngest pair in the group, and the threat of lasting damage to two relationships after Brittany was caught texting flirty pictures of herself to another man. (The fact that she’d been texting him in secret for five months didn’t help matters.) It looks like Cody is a lot less comfortable in The Lifestyle than his wife; and, as Tony reminded us in a different scene, communication is of the utmost importance for any couple interested in swapping: “If you don’t put in structure and rules, [The Lifestyle] is dangerous. This is not a healthy thing to do for a relationship that isn’t ready. This is not an easy thing to do for a relationship that is.”

So, there actually weren’t many sexy times in this episode–something of a calculated risk for the pilot of a show that looks to be about about sexy times. What we did get, more than once, was the message that this is a complicated way of living, one that leaves its participants open to ridicule and uncertainty. And that even within the clique of the Lifestyle, there are a lot of rules and regulations from couple to couple.

That said: The teaser after the pilot was packed to the brim with scintillating prospects. There are eight episodes of Neighbors With Benefits in front of us, and almost as many couples on the show. Let the speculation begin!

In related news, A&E has shared a short video featuring some of the different terms the stars of the show use to describe various aspects of the swinging lifestyle. For example, you won’t often hear insiders use the term “swinger” on the show; because the word has something or a pejorative connotation, the preferred nomenclature is “lifestyle.” One phrase viewers were treated to on Sunday was “soft swap”–namely, a spousal exchange in which all sexual activities are fair play except sexual intercourse itself. This is distinct from a “full swap,” which is exactly what you would think it is.

And, though the video above contains terms we haven’t yet seen on the show, worry not: the clip is spoiler-free.

Did you watch the Neighbors With Benefits pilot on Sunday? What did you think of it? Are you excited for episode two?

Does Lisa Barlow drink? The RHOSLC star’s tequila company and how ‘Mormon 2.0’ works