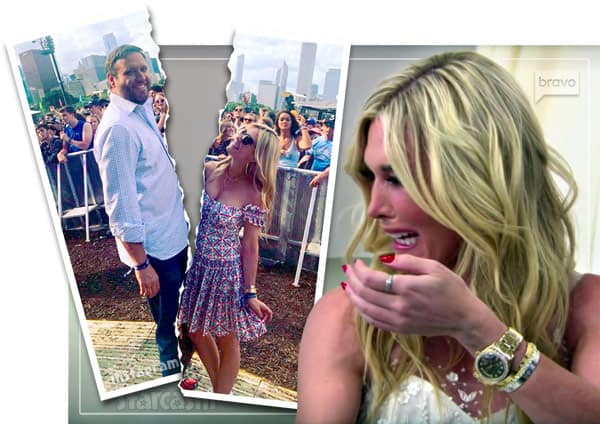 Some may doubt the power of the jinx, but when The Real Housewives of New York City star Tinsley Mortimer decided to go wedding dress shopping with her mom just weeks after reconciling with her boyfriend (nope, not fiance) Scott Kluth, I felt confident that she had pretty much doomed any potential walk down the aisle for good. The jinx is now being confirmed by multiple sources as Tinsley and Scott have reportedly called it quits again.

“She’s so busy in NYC and he’s so busy in Chicago that they are not exclusive right now because it’s long distance,” one source reveals to Us Weekly. “They’ve done this before, these little breaks,” the source continues. “They are both super optimistic they will be able to work it out when their schedules aren’t as crazy … They love each other so much.”

A separate source confirms the split with US and says that Tinsley “isn’t telling anyone they they broke up.” That source also seems to think that not all hope is lost. “Scott can’t let go of Tinsley emotionally,” the source says. “Tinsley is hanging on, hoping that Scott will agree to marry her.”

Source number three for Us agrees with the gaggle of other sources. “They are friends now, but will get back together.”

If all of this seems like déjà vu, that’s because the split is pretty much identical to the last time the couple parted ways back in October. The long distance was the main reason then, just as it was this time around.

The two kept the same line of communication open then as well. “We did break up … recently but I will say, that we talk every day,” Tinsley told Page Six in November.

Tinsley got back together with the CouponCabin.com founder in April, not long before heading out to shop for wedding dresses with her mother Dale and filming the unforgettable scene in which she broke down crying while looking at a photo of her frozen eggs on her phone.

So what do you think? Will Tinsley and Scott ever walk down the aisle together, or is their relationship just one of those permanently temporary kind of things?

PHOTOS Bethenny Frankel seen out and about with new beau; find out who he is