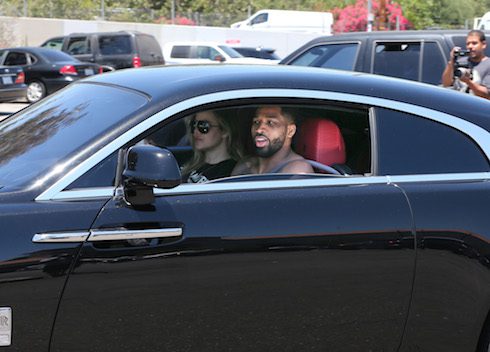 Khloe Kardashian and Tristan Thompson may be back together and bonding over baby daughter True, but that doesn’t mean Tristan’s cheating ways are a thing of the past. Now that Khloe & Tristan’s cheating scandal on KUWTK has been confirmed for the new season, it seems Kim has decided to speak up once more, confirming she “hates” Tristan and can’t stand the new storyline.

Tabloids have been speculating wildly about Khloe and Tristan’s future together for weeks, despite high-profile reports that Khloe “cautiously” took the Cleveland Cavalier back a full month after news of his numerous affairs broke. Before that, the two had been locked in a PR war, which backfired on Tristan when his reps claimed he felt like he was being portrayed unfairly and said *he* had a “list of demands” for taking Khloe back.

Khloe has largely kept silent in the weeks since Tristan decided to step out with Instagram model Lani Blair literally two days before Khloe gave birth to she and Tristan’s little girl. While speculation about whether Khloe was getting ready to dump Tristan grew, about the only thing we knew for sure was that the greater Kardashian family was — not to put too fine a point on it — royally pissed.

The extent is TBD, but Khloe & Tristan’s cheating scandal on KUWTK is now confirmed

One other thing we now know for sure, not that it comes as a huge surprise, is that Keeping Up With The Kardashians will in fact address Tristan’s dalliances. According to Us Weekly, the family’s long-standing policy of milking any and every rumor and peccadillo remains unchanged as the franchise creaks toward its Season 15 premiere.

“They always discuss real life things on the show. They’ve never ignored a topic,” said the source. “It will definitely be brought up, but they don’t know how much. They can film hours about it, but in the end, Khloé is one of the executive producers and will have final say on what actually makes air.”

Plus, while Tristan “would prefer that it isn’t brought up at all,” Khloe has reportedly told him “if it’s not dealt with on the show, questions will continue to linger.” And that’s a good line, but it isn’t necessarily true. Tristan will be known as the cheating douchebag for as long as he and Khloe are together whether or not the show ever brings up his cheating douchebag ways.

More to the point, hardly anyone actually watches Keeping Up With The Kardashians anymore. The show’s ratings have been dwindling for years. The Kardashians’ popularity on social media is what’s keeping KUWTK alive; it’s not the other way around. So it sounds like Khloe is using her left hand to placate Tristan with some grade-A surface-level logic, and letting him dangle until Season 15 drops with her right. In which case, props.

Meanwhile, the latest from In Touch is that Tristan is letting Lani Blair stay at his house now that he and Khloe are back in LA. “She now has Tristan’s house all to herself,” their insider claims. “Lani loves it there. She feels like it’s her home and knows that she’ll be there for a long time because Khloé won’t be coming back soon. That’s what Tristan told her.”

Shortly after that report went live, BET reported that Kim — surprise! — apparently “hates” Tristan. She’s “refusing to utter [his] name,” “doesn’t even want to talk about him at all,” and is passive-aggressively hoping that Khloe will pick up on some of Kim’s vibes.

“Kim wants Khloé to realize that she wants nothing to do with Tristan because she knows he is bad for her,” said their alleged insider. “Kim is determined not to back down and won’t even discuss Tristan at all. She loves her sister and that’s it.”