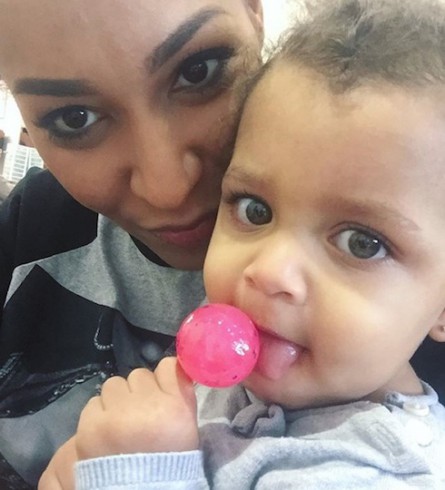 (RELATED: How many children and baby mamas does Love & Hip-Hop‘s Peter Gunz have?)

Is Amina Buddafly pregnant? Again? According to a handful of reports by several major outlets, the answer to both questions is yes–the Love & Hip Hop star decided to get right back on it with Peter Gunz following last year’s abortion and the subsequent fallout.

The last few months have been a bit of a roller coaster for Love & Hip Hop fans, where Amina Buddafly pregnancy stories are concerned. It was only a year and a half ago that Amina gave birth to she and Peter’s child Cori; then, just one month ago, the star confirmed that she had aborted her most recent Peter Gunz pregnancy, thanks to Peter also getting co-star Tara Wallace with child. The ensuing drama from that particular Love & Hip Hop Season Six plotline reportedly had Amina thinking about quitting the show altogether.

However, multiple outlets are now reporting that an Amina Buddafly pregnancy is, in fact, back on–with a vengeance. The possibility was first reported by Thacelebritea, before being picked up by The Shade Room‘s Instagram feed:

Is Amina really preggers? @thacelebritea broke the exclusive that #Amina of #LHHNY was preggers again and one of our #roommates sent in this pic of Amina rocking what appears to be a baby bump. What do you think #roomies? #sayitaintso

In addition, noted gossip site Fameolous, which has broken a host of Love & Hip Hop-related stories in the past, added the likelihood that the Amina Buddafly pregnancy is three months along, and that Amina herself broke the news to her fellow L&HH castmates during the taping of the reunion special.

We’re further hearing that there’s a strong possibility Peter Gunz is not the father, though there have been several conflicting reports on this point. It’s known that Amina was borderline “devastated” by news of Tara Wallace’s pregnancy by Peter; that information has fans wondering whether Amina decided to step out and follow through.

Though the star herself has not addressed the latest Amina Buddafly pregnant rumors directly, she has been a bit more active on social media over the past few days–particularly where haters are concerned. Here’s her most recent tweet: Tweet to haters:

And here’s a just-shared Instagram post, which Amina put up following the most recent Amina Buddafly pregnant story going wide:

I mind my business.. Have fun on my page with eachother??