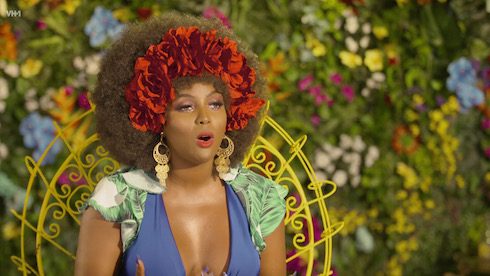 Love & Hip Hop Miami is set to bring a whole new level of intensity to the storied VH1 franchise. And no one better represents the flavor of the latest show than Miami-born Afro-Dominican Amara La Negra, whose popularity in Spanish-speaking music markets has her craving a crossover smash.

So who is Amara La Negra? She’s collaborated with some big names — among them Kent Jones, Sean Paul, Mr. Vegas, and fellow LHHMIA cast member Trina — and has seen her star rise pretty quickly over the past few years. Amara was just 22 years old when her first hit, “Ayy,” went viral back in 2013. Since then, it’s racked up nearly 20 million views on YouTube alone, and earned her an early reputation as the “Queen of Twerk”:

Not long after “Ayy” blew up, Amara’s fun and revealing interview with Latina gave her audience a more in-depth look at the budding star. For starters, Amara explained that her mother — who emigrated to America by herself — set the hard-working example that Amara tried to emulate from a very early age.

“My mom sacrificed a lot to give me a decent lifestyle,” Amara said. “She worked up five jobs in order to maintain the household and still keep me in the music….I do everything I do to make her proud.”

Amara further explained that she “missed out on a childhood” because she was so focused on building a career from such a young age. Though it may sound like Amara’s childhood was filled with nothing but work (around the same time as the Latina interview, Amara told Vibe “Growing up my mom would ask, ‘Do you want to have fun or prepare for your future?'”), it seems clear from Amara’s tone that she has true, almost pure love for what she does — and has from her earliest days:

Amara also shared what her Dominican roots mean to her, saying, “It means sabor, tamboras, music and rhythm! It means humility and happiness. It means so many things to me. I’m very proud to be Latina, but even more to be Dominican. I was born in Miami, and didn’t get to visit the island until I was 18. But that gave me the opportunity to really embrace and love my culture.”

Now 27, Amara is ready for even bigger things. As she told VH1, “I’m doing great in my Latin industry…it just so happens it’s one of my dreams to also do the crossover into the American market.” (Amara also noted that she may be helped out by one of her Love & Hip Hop predecessors: Cardi B, whom Amari calls “my girl,” is also Dominican.)

And even more than that, Amara says, it’s her mission to rep for every Latina who looks like her, but whose story hasn’t been told yet. “There’s women that look like myself in every single Latin country,” she explained. “But everybody just admires and looks at the J. Los and the Shakiras….By the end of this season of Love & Hip Hop Miami, I definitely want people who don’t know about Afro-Latinos to get informed. [Afro-Latinas] have been here, and nobody has really spoken about us.”

You can follow Amara La Negra on Twitter here, on Instagram here, and on YouTube here. She’s already promised new music at the top of 2018, to coincide with her LHHMIA debut, and her latest single is making waves:

(Photo credits: Who is Amara La Negra via Instagram)