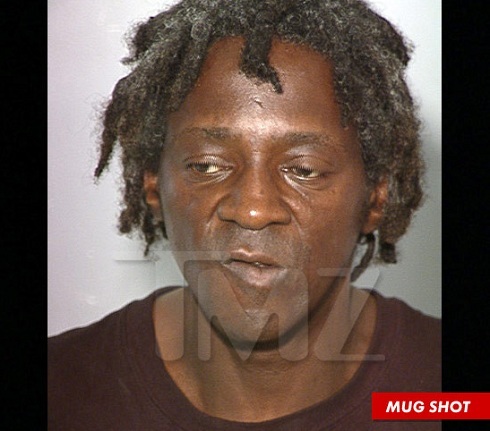 Flavor Flav is back in the spotlight. The rapper/reality star has been in and out of jail since he was just a teen, and now that he’s 53, not much has changed. Flav, who in addition to his music career has also been seen on VH1’s The Surreal Life and Flavor of Love, was arrested early this morning at his home in Las Vegas after allegedly assaulting someone with a deadly weapon.

Law enforcement told TMZ that Flav had allegedly gotten into a verbal altercation with his fiance, Liz, and a teenager that was in his home at the time which led to his fiance calling police. Flav and Liz are currently living with her son, Gibrian, who is from a previous relationship. However, the identity of the teen has not been confirmed.

According to the report, Flav threatened one person with a knife during the argument and battered the other. There’s no word on who he did what to. Flav was then arrested around 3am and booked on two charges, the first being felony assault with a deadly weapon and the second is a misdemeanor domestic violence (battery) charge.

The Public Enemy rapper has a history of domestic disputes. He was arrested in 1991 for beating up his then-girlfriend Karen Ross which he later plead guilty to and later in the 90’s was charged again with domestic violence. He also has a slew of drug charges including marijuana possesion and cocaine possesion. Last year, Flav admitted that at the highest point of his addiction, he was spending $2,600 per day on crack cocaine.