After much speculation, delay and even a cast standoff over salaries, we finally have the trailer for the upcoming 6th Season of The Real Housewives of New York City.

Bravo called the ladies’ bluff and all of them returned to filming – except for The Countess – so she’ll be absent from the first 3 episodes of the run. In Housewives terminology, she’s now a “recurring cast member” as opposed to a “full-time Houswife.” We also get introduced to new addition, Kristen Taekman.

Are you ready for 2 and a half minutes of Big Apple preview insanity?

The NYC version of the franchise has been getting hit hard lately via critics and blogs but I have to say — this looks like a pretty darn awesome stew of hot mess! Could we have ourselves a big city rally?

Some of my personal favs from the teaser:

• The hot-pants attempt by Sonya at tossing a tomahawk.

• The quote from George the grandfather/playboy, “Ramona is a b*tch. You know what happens to b*tches? They get f**ked by dogs.”

• Sonja losing her tooth and Aviva’s leg randomly laying on a maroon carpet. 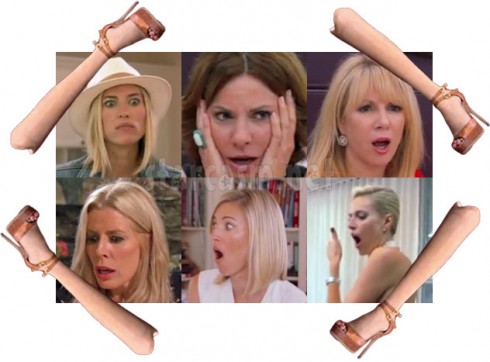 The Season 6 premiere of The Real Housewives of New York City on Bravo is scheduled for March 11 at 9/8c.

Sonja Morgan wants to like Bethenny Frankel, but bigger!