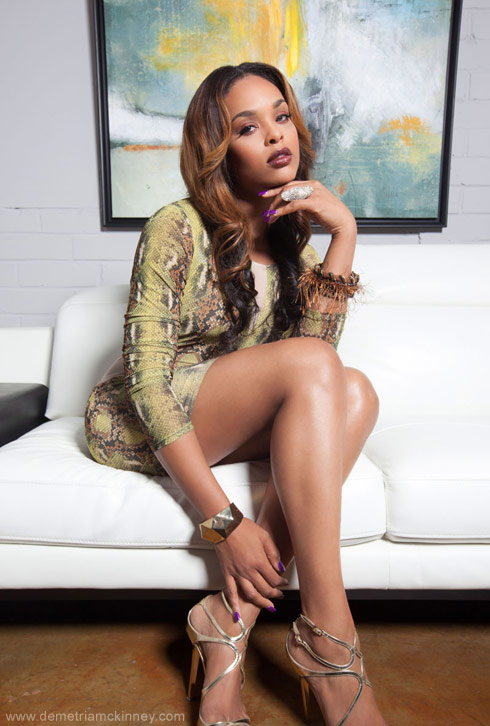 Demetria McKinney is the latest official cast member named for season 7 of The Real Housewives of Atlanta. But like other cast members who have come before her, including Kim Zolciak and Kenya Moore, Demetria isn’t a housewife in real life… at least not yet.

So who is Demetria McKinney dating? She is currently in a long-term relationship with Roger Bobb, President and CEO of Bobbcat Films, a film and TV production company based out of Atlanta. Roger’s resume is impressive. He was a former Executive for Tyler Perry Studios, a winner of six NAACP Image Awards, and currently has three hit TV shows airing.

Here is a photo of Demetria McKinney and Roger Bobb together at the 44th NAACP Image Awards last year:

He’s considered quite a catch in Atlanta’s social scene! In addition to being an accomplished TV, film, and theatrical producer, Roger is also tall, dark, handsome and…British?!? Roger was born in London but moved to Brooklyn at the age of four and credits his inspiration for film production to Spike Lee.

It’s unclear whether or not Roger was previously married, but he has at least one child, a daughter, named Renee. The father and daughter have been photographed at a few events together. At one of those events back in June of 2009, Renee revealed she was six years old, which makes her 11-12 now. Here is Roger Bobb and his daughter Renee from June of 2010:

Even though Demetria and Roger are an item, rumors surfaced late last year of a relationship between him and Kenya. The rumors were sparked after the pair were seen (and photographed) being quite flirty together at Peter Thomas’s 53rd Surprise Birthday Party hosted by Cynthia Bailey in October:

However, “everybody knows…” that Kenya can get a little flirty with just about anybody (especially a wealthy, successful, handsome fella like Roger!) and I’m thinking maybe those rumors were just that. Atlanta scene blogger Tamara Tattles agreed in a post earlier this month:

I did not report on the Kenya Moore and Roger Bobb rumors because there was nothing to substantiate it other than a bunch of pictures with the two of them hanging out at a party. However, if you google Roger Bobb, one of the first suggestions is Roger Bobb and Kenya Moore. I personally don’t think the two of them ever dated. Y’all know how flirtatious Kenya is and pictures can be deceiving.

Mmm hmmm. Whether the rumors were true or not, I can’t imagine Kenya’s not gonna be throwing around claims and pulling up all those photos on her phone for everyone else to see. (I noticed that there weren’t any photos of Kenya and Demetria casually hanging out on the cast’s recent trip to Puerto Rico.)

Tamara Tattles later adds, “However, word on the curb is that Roger Bobb and Demetria McKinney are dating.”

Actually, there are photos of Demetria and Roger looking chummy together at various events over the last five or six years. I realize they had a working relationship, but photos like this one from the 2009 Stewpendous Awards make me think they have been an item for some time:

I assume we will find out more when The Real Housewives of Atlanta returns for Season 7!