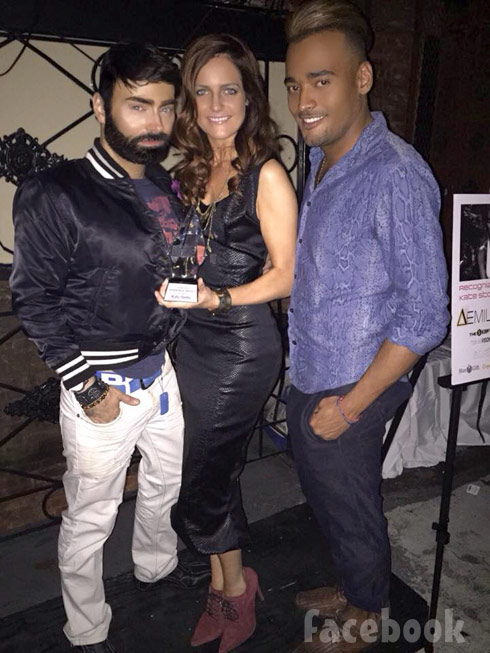 Apparently we aren’t the only ones who admire what Breaking Amish star Kate Stoltzfus has managed accomplish since first appearing on the original installment of TLC’s Breaking Amish! The 24-year-old, who goes by Kate Stoltz professionally, was honored at the 2014 Demiurge Awards Tuesday night for her work on television, professional modeling and fashion design.

Kate shared the photo above of herself holding her award on Facebook earlier today and wrote, “I had the best hair stylist and makeup artist in New York last night.. I was so happy with the results. Thank you for makeup Chris Lanston and hair Jason Kessler you guys slayed it.” She also pointed out that she was wearing a dress that she made.

The top photo was originally posted by makeup artist Chris Lanston, and he revealed that TLC cameras were there to capture the event for the upcoming season of Breaking Amish! Or at least I assume that was why they were there. “Had a great night tonight for Kate’s award,” he wrote, before adding, “And yes it was filmed ( I had no idea ) but you’ll see it on TLC.”

Kate wasn’t the only one at the event wearing one of her dresses, there were at least five other ladies sporting Kate Stoltz originals including Mercedes Edison and Nastya Armanova. Here they are posing with hair stylist Jason Kessler: 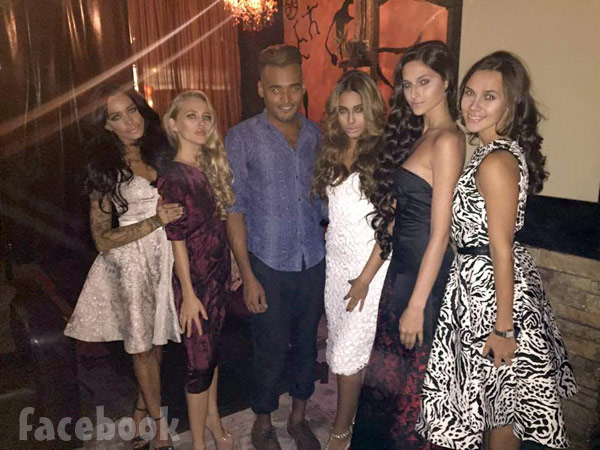 The Demiurge Awards are presented by The Skinny NYC and here is their announcement that Kate would be receiving the honor: 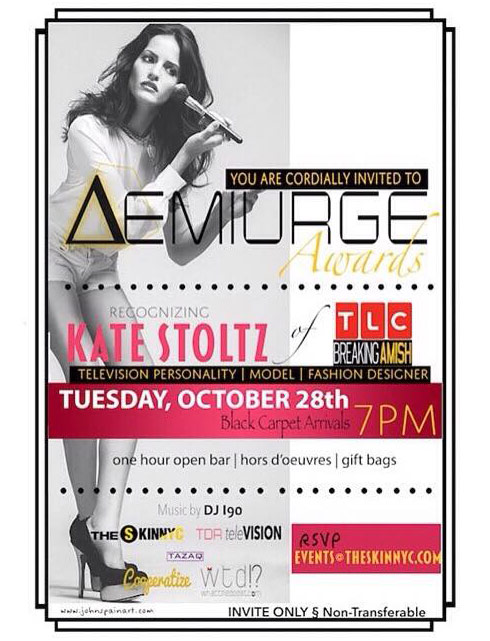 The Demiurge Awards is recognizing Kate Stoltz of TLC’s hit reality show: Breaking Amish. Kate has quickly shifted from demure to demiurgic. Relocating from a small town in Pennsylvania to the Big City. Kate has made her reality TV stardom more than worth it by adding to her catalog a thriving modeling career; currently a member of the model management powerhouse Major Models and most recently unzipping her artistry in Fashion Design.

And in case you were curious about the origin of the Demiurge Awards (and the definition of Demiurge for that matter), The Skinny NYC explains it this way:

Demiurge [dem•ee•urj]: one that is an autonomous creative force or decisive power

The word Demiurge originates from the latinized Greek word “demiourgos” meaning craftsman or artisan. Gradually the word evolved to indicate a creator. The Demiurge Award pays special attention to the skillfully adapted; who create, produce and bring business to NYC through innovation.

@katestoltz designer event – Thank you for having us ! Wearing your beautiful dresses ! #realityshow #TV @chrislanston thank you darling for gorgeous and pretty make up and thank you Jason Kessler for bouncing curly fabulous hair with one of a kind @unimercenew

Just one day prior to the event Kate posted about being named the award recipient on Facebook:

Being honored with a creative ‘Demiurge’ award tomorrow evening. I’ll be showing a couple of my designs and giving a free door prize to the raffle winner. Models, makeup artist, hair stylist, food, venue are booked… super excited, drinking coffee and trying to finish the last couple dresses 🙂

And she also shared a potentially disastrous story from the day of the event that miraculously had a happy ending. “Lost my dress for tonight on the way to do hair and makeup,” she wrote Tuesday, “came back 3 hours later to find it right beside the street, unharmed. I feel like the luckiest girl right now!”

Those good vibes continued through to today:

I could sleep for a day.. Last night's excitement tuckered me out

told a friend I don't feel like I deserve this:he told me to get myself together, he doesn't associate w/ basic bitches. #gettingittogether

UPDATE – Kate shared a photo of her award on Facebook:

Prior to picking up her bling for being awesome, Kate was busy payin’ the bills by rocking some rather fun Love Cage unmentionables during Lingerie Fashion Week in New York:

It’s hard to tell in the photo because it’s so blurry, but Kate is holding a pair of handcuffs. 🙂

Here’s another photo of Kate looking fiercely fetishtastic (in the background) with a link to a review and more photos from the show:

“Booked my first lingerie fashion runway show for this Saturday in NYC,” Kate wrote beforehand. “Def does wonders for the self confidence having to be bold enough to walk in lacy underthings in front of a crowd….”

As far as the Love Cage lingerie line, designer Stephanie Paterek describes it this way:

This debut LOVE CAGE collection was really about setting a tone for the new RTW line in general. With fetish and vintage inspirited silhouettes and my signature SEXTRASH hardware embellishments, it is a strong look for curious, empowered women. Fabrications range from lace to leather to silk charmeuse.

There is no word if TLC cameras were there for the lingerie show. (Please tell me they were and Mary Schmucker and Katie Ann were in attendance! Oh man, maybe even Jeremiah was there to offer up his non-demiurgeous negativity while ogling and hitting on the models.)

Her are a couple parting looks at Kate rocking her own dress on the black carpet on her night: