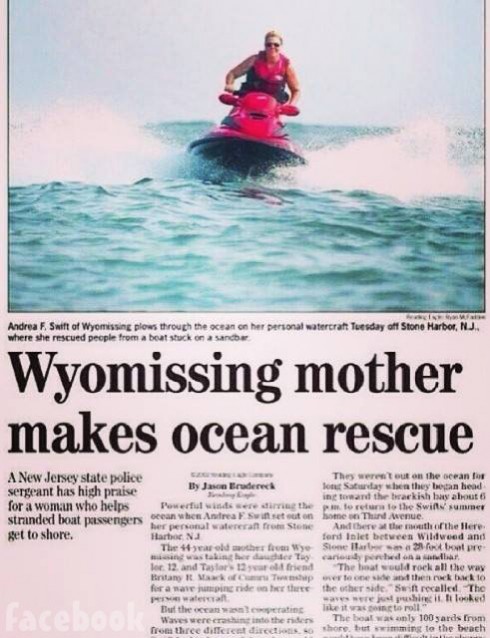 In honor of #FlashbackFriday singer Taylor Swift posted a news article from 2002 (above) about her mom Andrea Swift’s heroic rescue of boaters stranded on a sandbar near Stone Harbor, New Jersey. Taylor described the photo, which features a rather dramatic (ie, badass) photo of her wave-crashin’ momma in action, with the rather humorous caption, “Flashback to 2002 when this was the most attention my family had ever gotten.”

I did a little research and managed to dig up the rest of the article, which appeared above the fold on the front page of the Reading Eagle on August 14, 2002: 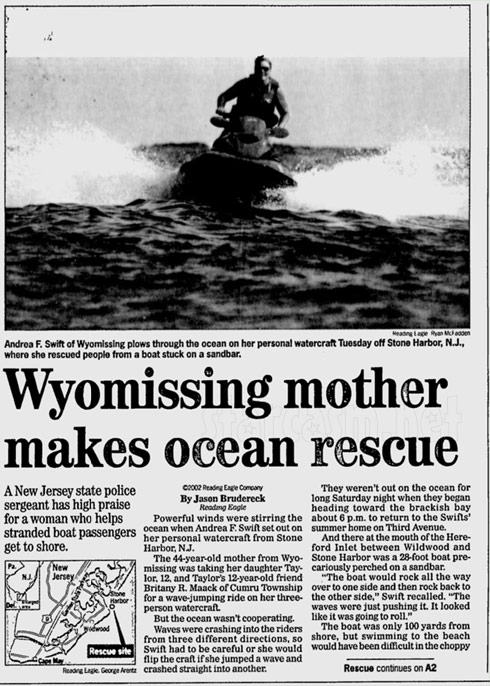 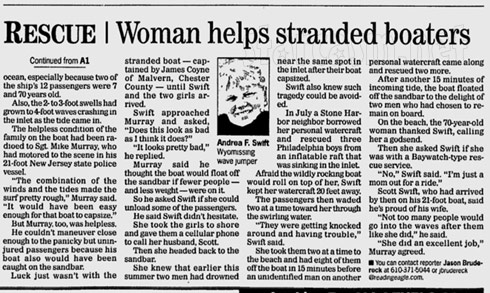 Yes, the article mentions Taylor, who wasn’t even a teenager at the time.

“Powerful winds were stirring the ocean when Andrea F. Swift set out on her personal watercraft from Stone Harbor, N.J.,” the article begins. “The 44-year-old mother from Wyomissing was taking her daughter Taylor, 12, and Taylor’s 12-year-old friend Britany R. Maack of Cumru Township for a wave-jumping ride on her three-person watercraft.”

My favorite part is towards the end when the article states:

On the beach, the 70-year-old woman [whom Andrea had rescued from the sandbar] thanked Swift, calling her a godsend.

Then she asked Swift if she was with a Baywatch-type rescue service.

I did a little more research, this time on Britany Maack, and discovered a Reading Eagle article about her childhood friendship with Taylor Swift written in 2011 that included photo of them as kids and one taken in Philadelphia on August 6, 2011 when Taylor was in town for a concert: 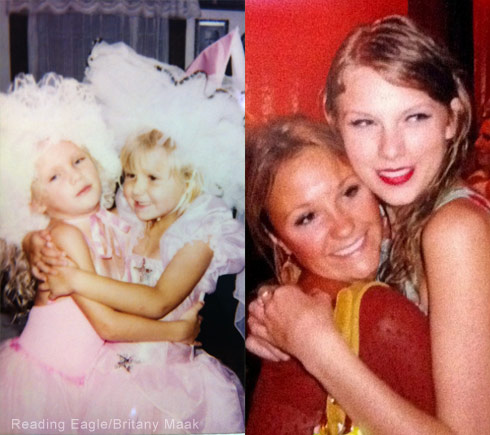 “Taylor’s family was my family,” Britany says in the article. “In the summer our parents would go to the beach and I always remember going to her house in Stone Harbor,” she said. “Her parents would take us on boat and jet ski rides and we would play all day long in that bayside house.”

The article ends with Britany saying of Taylor, “She is not only my friend, but a constant inspiration.”

What I want to know is, where’s the heroic jet ski rescue ode to mom song?!? 😉 The chorus would have to end with “I’m just a mom out for a ride.”