In Taylor McKinney’s Order of Protection filing, he alleges that his Teen Mom OG co-star Ryan Edwards threatened to “put a bullet in my head” during a phone conversation on March 20. The allegation is made a bit more terrifying by a combination of factors: Ryan’s history of drug abuse, his controversial practice of gleefully shooting feral cats on his property, his current state of mind given all that has happened over the last week and a half, and the sheer number of guns that appear to be in his possession.

Ryan’s drug issues have been well documented, so there is no need to rehash those here. As far as his cat shooting spree, that all went down in August of 2016 after he posted a photo taken on his property and captioned it by writing: “Use to be the cat hang out but I been putting them down with the ol’ air rifle.” Ryan added the hash tags: #quick@quiet and #deadcats.

After the photo stirred up some angry reactions, Ryan laughed off the criticisms and later pointed out “Even Got high explosive pellets” in a caption to a photo of his air rifle.

Although there was an investigation launched into Ryan’s cat hunting, charges were never filed. The Chattanooga Humane Educational Society director Bob Citrullo said that prosecuting Ryan would have been difficult given that the cats were feral and difficult to classify in accordance with the statutes. “It’s very specific on companion animals and livestock, but feral cats are falling in between [the laws],” he said.

Ryan would later claim that he was only joking and he was “just doing it to build hype … He didn’t think he’d get this much aggravation out of it,” Citrullo said. Given all of the comments made by Ryan and the photos that he posted, not many believed that he was joking. Plus, investigators reportedly found animal remains and cat food “all over” his property. “If you have a cat problem, you don’t put food all over the place,” Citrullo argued.

The cat shooting incident revolved around an air pellet rifle, but Ryan has shared numerous photos of actual firearms believed to be in his possession. His most recent Instagram photo is this picture of five handguns uploaded on January 7: 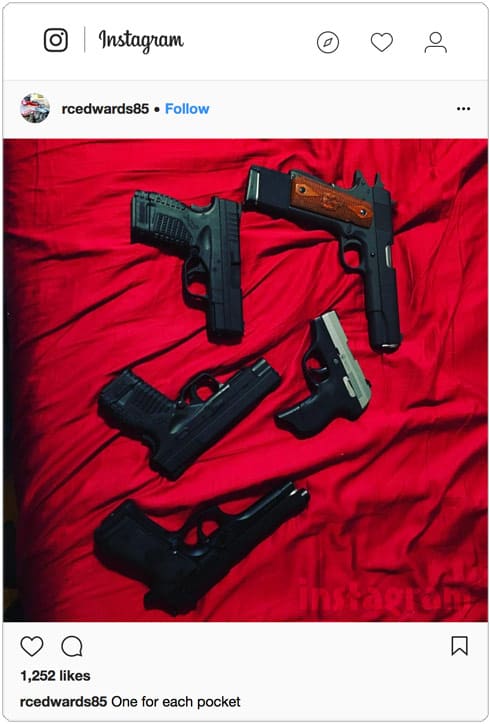 “One for each pocket,” he captioned the picture.

In December of 2014, Ryan uploaded this next photo, which looks to include an assault rifle and two handguns: 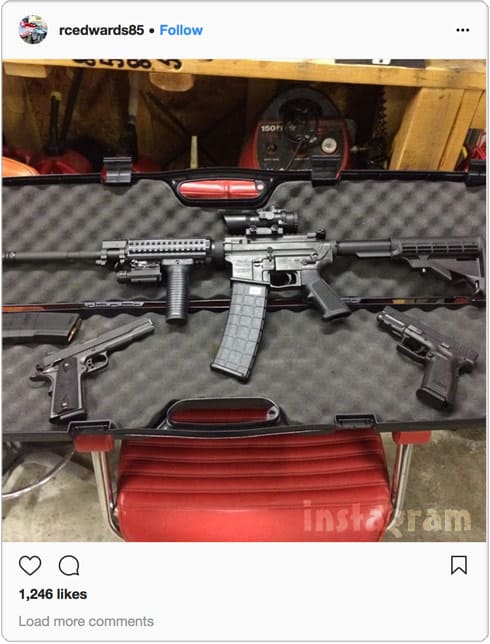 Ryan provided no caption for the photo, but later in the day he posted this photo of the results from the shooting range (I assume): 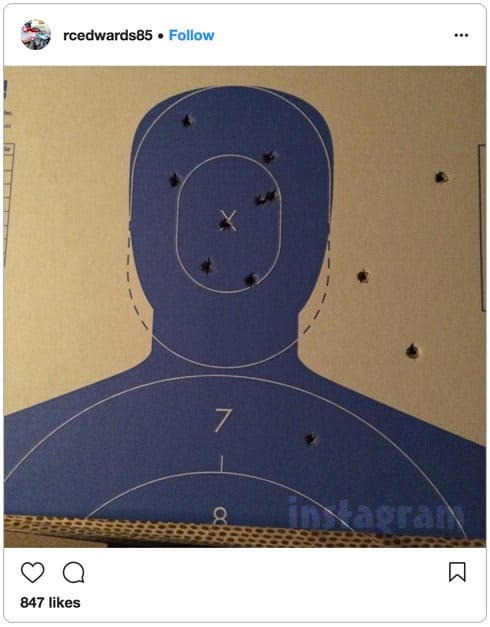 Ryan also shared a couple photos holding pistols like a wild west gangster — including one in which he is wearing a bandana over his face. (You can see both photos in the collage image at the top of this post.) Ryan tweeted both of the pictures at former American Guns hottie Paige Wyatt and captioned one by writing: “you should come to TN an show us how to shoot.”

I do not know how gun laws work in this type of situation, and I most certainly don’t want this post to spark the usual black-and-white / left-and-right non-productive “debate” on gun control, but it does seem logical to me that someone named in a protective order who threatened to shoot someone else should at least be made to surrender his/her assault rifle(s) until a ruling is made? (The potential argument that Maci and Taylor should just get assault rifles of their own and bring them to Bentley’s baseball games makes less sense to me.)

No matter what is within the power of the law regarding Ryan’s arsenal, it seems clear that he is a bit unstable right now, and I hope that he is at least being monitored closely by friends and family. Though it is uncertain if he has relapsed, he did recently find out that he is having another child, and it does appear that he and his pregnant wife Mackenzie are having marital difficulties amid reports that he is back on Tinder flirting with women. Plus, it is only within the past week that the public has been made aware that Ryan was caught by police with heroin and needles, and now he is being accused of threatening to shoot Taylor in the head and confront Maci and Taylor at Bentley’s baseball game!

I am the first to argue that the debate surrounding the Second Amendment is more complicated than the protest signs and Facebook memes make it out to be, but the prospect of Ryan having access to firearms right now — especially assault rifles or other automatic weapons — just does not seem right. And my concern is not only over Ryan potentially harming someone else, but that he may harm himself.