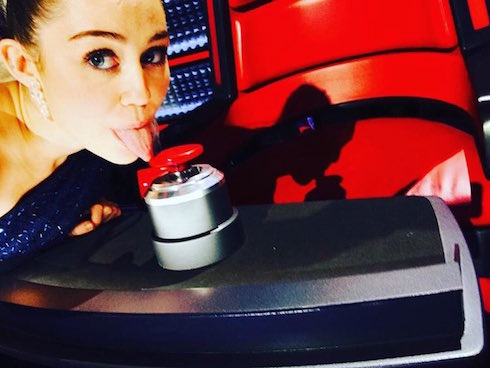 Miley Cyrus has confirmed that she will join The Voice as a key adviser to the aspiring singers vying for the Season 10 title, and while the future Mrs. Hemsworth won’t be turning a chair, she is sure to be turning some heads with her undeniable talent (and unfiltered behavior).

Miley announced her role in the upcoming season by posting the Instagram photo above of herself with one of the show’s iconic turning chairs as she prepares to press the red botton…with her tongue, of course. “Lickin @xtina buttonz!” Miley wrote, adding the hash tags #keyadviser and #season10.

Christina Aguilera, who is taking back her original spot on the vocal competition as one of four coaches, also confirmed the news of Miley’s season 10 contribution, posting this next tonguetastic Instagram photo alongside the show’s newest key adviser and added the caption: “Most fun Voice day ever!”

While Christina will be taking the coaching reins back from Gwen Stefani this season, Gwen will return the show to lend a hand to boyfriend Blake Shelton, contributing as an adviser to his team. Christina will enlist the help of Patti LaBelle for her team, and returning coaches Adam Levine and Pharrell Williams will work with Tori Kelly and Diddy, respectively. Past advisers for The Voice have included Sia, Lionel Richie, Taylor Swift, Mary J. Blige, Miranda Lambert, Ne-Yo and Robin Thicke (to name a few).

Season 10 of The Voice premieres February 29 on NBC, with new episodes airing on Mondays and Tuesdays.