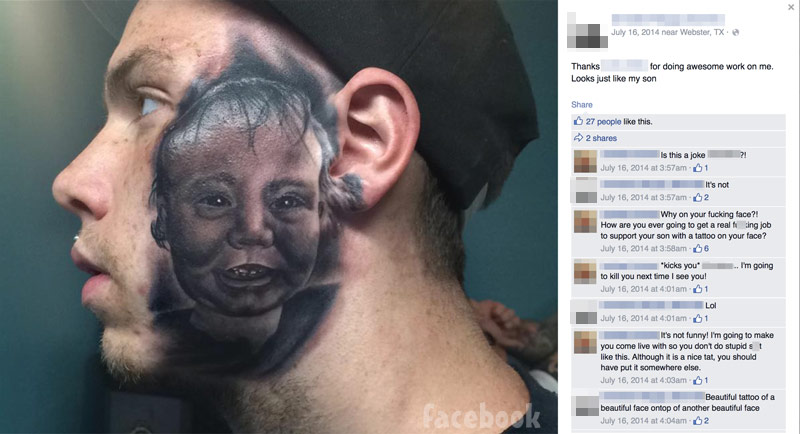 Tattoo tributes to children are fairly common, but this young Texas dad took the art of the tattoo offspring ode to a whole new level by getting the entire side of his face tattooed with a portrait of his infant son! (Click photo above to enlarge)

Although I just recently ran across the photo, it has actually been a bit of a viral sensation since at least six months ago when it was shared on the “trashy” subreddit. I tracked down the proud pop’s Facebook profile as well as the photo, which was originally posted on July 16 of last year. I think the comments left on the photo pretty much sum up the whole thing (from both perspectives).

*I have changed the man’s name to Chris.

COMMENTER 1: Is this a joke Chris?!

COMMENTER 1: Why on your f***ing face?! How are you ever going to get a real f***ing job to support your son with a tattoo on your face?

COMMENTER 1: *kicks you* Chris.. I’m going to kill you next time I see you!

COMMENTER 1: It’s not funny! I’m going to make you come live with so you don’t do stupid sh!t like this. Although it is a nice tat, you should have put it somewhere else.

COMMENTER 2: [In a series of comments] I give it 3 years before the regret starts Rollin in…Poll more like 3 days…Probably*…Lol ONE day…I’m not judging tho. I think it’s great work. But society frowns upon face tattoos

CHRIS: Well my son looked at it n smiled so that’s all I care about

And just in case you were curious, here’s what’s on the other side of Chris’s head.

The bold statement piece has a number of potential drawbacks, including making it more difficult to find work. It seems Chris did struggle with that one and another one that may now put pressure on his to do it all over again. From September:

CHRIS: So for those of you who do not know, me n [girlfriend] are having another kid n were keeping it. We may fight all the time n always break up but that’s no reason to kill an innocent child n I’m going to have to find another job so I can make money while I apprentice.

COMMENTER 3: Now u gotta tattoo your other kid on the other side of your face

COMMENTER 4: If you and [girlfriend] decide to have more after this, than you always have your butt cheeks:p

GIRLFRIEND: No he I’d NOT tattooing anymore of his face this is why I didn’t want to have another kid and it jynxed us. But were going to try our best I guess and TRY to respect each other. I love chris with all my f***ing heart and I love this family. But I want us to be a happy and honest family for once and I’m hoping this child will be a girl so it will make him grow up a Lil bit more lol

GIRLFRIEND: I’m so worried and stressed out as always lol…All he needs is a job me to get a second one and a CSR and apartment /: …I’m just worried about too much.

[A commenter suggests some tips for Chris to get a job.]

GIRLFRIEND: He has a face tattoo its hard. That’s what’s is stressing me out.

In December Chris posted that he is now a certified electrician. His girlfriend is due any day now and the couple is expecting a little girl.