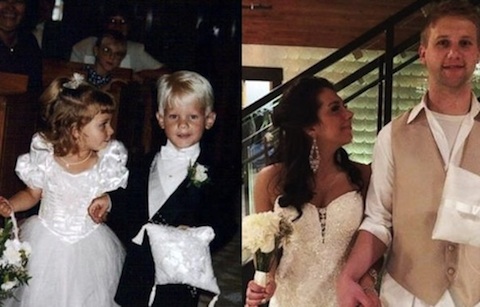 Brittney Husbyn (amazing name #1) and Briggs Fussey (amazinger name #2) first paired up at the 1995 wedding of Fussey’s godmother’s wedding. The pair were three. They were also adorable. They took a familially-iconic photograph–see the left side of the image above–which was cherished in both the Husbyn and the Fussey houses for years.

And, for years, that was the end of it. Except that, between now and then, the pair reunited, fell in love, and got married. 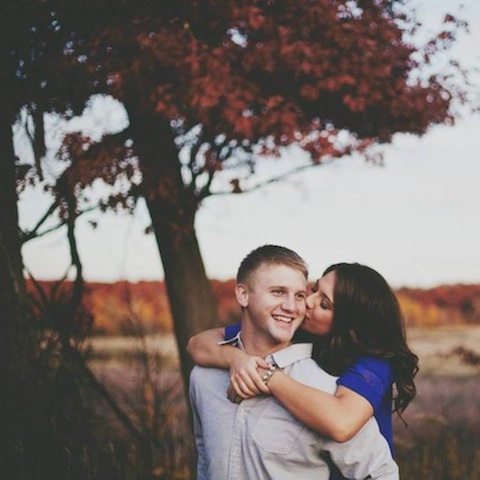 The Fussey-Husbyn coupling began in earnest in 2007, when the pair reunited in a government class in high school. Said Briggs, “One day, [Brittney] went home to ask her mom about me. I have a pretty unique name, so that must have stuck out to her.”

And indeed it did. Shortly thereafter, Brittney brought the infamous wedding photo with her to class, which she showed to Briggs. “I started to laugh,” he said, “because it was the same one we had hanging in the hallway at home, but I never knew who she was. That wedding was the only time I ever saw her.”

The two were dating other people at the time, but became friends. Two years later, they started dating each other. Then came graduation, and the inevitable departure for college: he to the University of Wisconsin-La Crosse, she to Minnesota State-Mankato. But the pull of true love was too strong for the Briggster, who transferred to Mankato, and then proposed.

And then, this past Saturday, the couple walked down the aisle for themselves. Before they were done partying with the 310 guests, though, they took a moment to recreate the iconic ’95 photo.

Now that their story has gone viral, they’re reveling in attention–but one family member appreciates it more than all the others.

“My godmother, she takes all the credit,” says Briggs. “It’s constantly brought up that we walked down the aisle together again….We never expected having all this popularity, but we’re enjoying it. We will definitely print out the articles and keep them around. I’ll show them to my kids.”