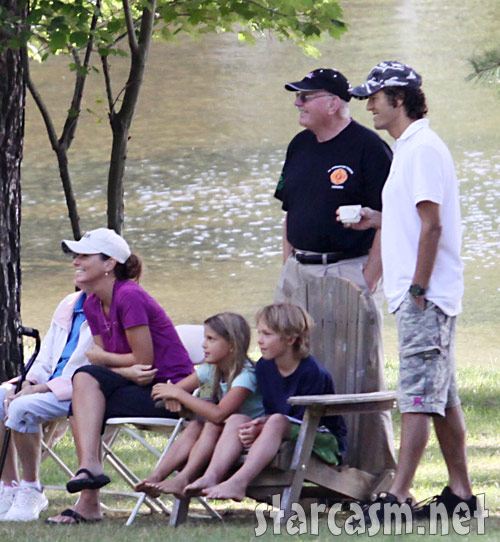 In a real-life version of Wife Swap, country music superstar Shania Twain is now officially engaged to Frederic Thiebaud, the man who was married to the woman Shania’s ex had an affair with! That there’s a country song that writes itself!

In the wake of their betrayals, Shania and Frederic became close and would eventually develop a serious relationship, a relationship Shania first acknowledged publicly on her web site on her 44th birthday by stating (in part):

A dear friend and true gentleman by the name of Fred, has been the most constant companion of support for both Eja and me, and having gone through the suffering of his family splitting apart at the same time under the same extreme circumstances, he understood me better than anyone. We leaned on one another through the ups and downs, taking turns holding each other up. We’ve become stronger and closer through it all, as have our children Eja and Johanna (Fred’s 8 year old daughter).

(Top photo: Shania Twain and Frederic Thiebaud (wearing the hat), both wearing rings, take their children Eja Lange and Johanna Thiebaud to a wild bird show at the Port Cunnington Lodge on Lake of Bays in the Muskoka region of Ontario on August 19, 2009. A family friend joined them. Twain spent the week at her nearby cottage. Photo: SplashNews.com) 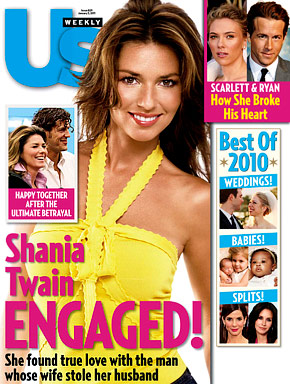 A friend of Shania’s tells Us Weekly, who breaks the story in this week’s issue that hits newsstands Tuesday, “I’ve never seen Shania so happy.” The pal goes on to add, “She has ended up with the love of her life.”

In case you’re wondering what the story is on whose bed Shania’s boots have been under, Frederic Thiebaud is a Swiss-born executive for the Nestle corporation. Forget the country song, this is all starting to sound like a Johnny Depp movie now!

Shania and Frederic each bring a child into the relationship. Shania has a nine-year-old son named Eja D’Angelo and Fredric has a nine-year old daughter named Johanna.

Here is the complete text of Shania’s message to her fans from ShaniaTwain.com after her 44th brithday:

A NOTE FROM SHANIA

Thought I would drop a line to catch you up on things in my life and what better time than on my birthday.

I feel very much alive and well, ready to take on the gift of another year. I’ve been on a few interesting trips, reading some helpful and motivating books, meeting fascinating people and getting the most out of life that I possibly can. Living, loving, laughing and dreaming have become highest on my list of priorities. I’m looking for places to be and things to do that inspire me to write and be creative, concentrating on moving on and forward.

When I wake up each day I remind myself how lucky I am to have all the beautiful things I do in my life and allow that gratitude to fuel me for the day, taking one day at a time. I try not to worry about tomorrow since I realize I can’t control what it will bring or whether tomorrow will even come. So, I focus on today and treat every minute with the respect it deserves and not take it for granted. I steer my energies toward being productive and finding motivation from every person, place and thing I encounter.

Traveling has helped a great deal. I consider myself on a journey of discovery and recovery. I don’t accept to be held down by the past, nor do I expect too much of the future. This allows me to dream freely with no strings attached.

I recently read something very encouraging to someone like myself, who lives and loves to dream: “PLANS HAVE TO BE REALISTIC, DREAMS DON’T.” Of course, I love this notion and allow myself to dream positive things and plan to live them out.

I make a point of surrounding myself with fun, positive, compassionate, loving people. Loved ones I can trust. After all, good company brings good feelings and feeling good just makes life more pleasant. The love and understanding of my friends and family have pulled me through the recent difficult time. It’s as if several hands grabbed me by the scruff of the neck during my lowest moment and promised not to let go till I was safe. They kept their promise, and I want to thank them, my lifesavers.

So, thank you my dear friends and family. Thank you to the fans as well for your words of comfort and encouragement.

All this has given me enormous strength.

A dear friend and true gentleman by the name of Fred, has been the most constant companion of support for both Eja and me, and having gone through the suffering of his family splitting apart at the same time under the same extreme circumstances, he understood me better than anyone. We leaned on one another through the ups and downs, taking turns holding each other up. We’ve become stronger and closer through it all, as have our children Eja and Johanna (Fred’s 8 year old daughter).

“The kids” came along on several of the trips you’ll see in the montage. My mother often called me her little Gypsy so it’s no surprise that travel is working for me in finding inspiration through seeing new and fascinating things. I’m putting that inspiration in to writing and more dreaming.

The best part about my dreams lately, is that not only am I allowing myself to dream, I set those dreams into action and live them out.

Fred filmed and snapped away during the travel adventures of the last six months, capturing the dreams becoming reality. The home footage is full of happy faces, beautiful, interesting places and lots of horses. Yeah!

When I reflect on it all, it’s clear how remarkably active my life has been since last December – a time in the life of someone working hard to “move on” and succeeding. Life has been gracious to me and the images show that very clearly.

Why I decided to share this personal side of my life with you at this point is to answer the questions I get asked so often lately: “how are you, where have you been and what have you been doing?”

A big part of the answer is in the montage. I’m “okay” – yes, I hit a very big bump in the road, but Eja and I are doing well and with all the concern you, my fans, have shown over this difficult period, I want you to see for yourself that we are doing fine, by sharing these personal images with you. Sorry about the poor quality of the footage but almost all of what you will see, both photos and video, were shot on Fred’s cell phone with the exception of the skydive filmed from a tiny, wrist camera worn by the guide. Although the images weren’t originally filmed with the intention of sharing them publicly, in the end I decided it was more fun to share them. We weren’t paying attention to quality, all of it being done on the fly, so I’ve included text in various places to help explain and make things easier to follow. Once again, it’s all very candid footage so be ready to see a lot of me without makeup, no touch ups, some bad hair and looking pretty goofy. There is no glamour but plenty of genuine smiles.

Fred and I have certainly had a lot of laughs through the months and while sharing these images with a good friend of mine after each trip, she now affectionately refers to us as, “Lucy and Ricky Ricardo”.