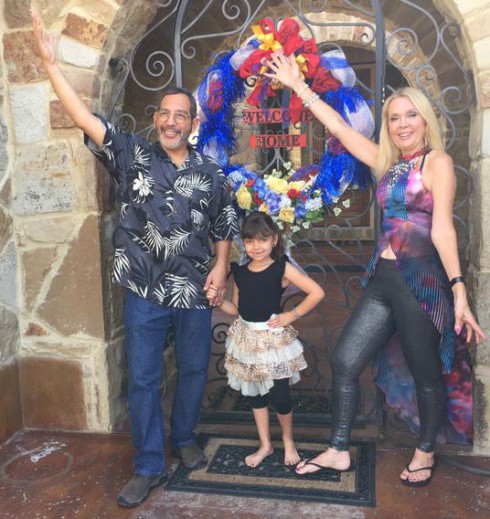 Farrah Abraham returned home to Austin last night after more than one month away in the U.K., where she definitely made her mark on the British viewing audience during her stint on Celebrity Big Brother and appearances on CBB Bit On the Side. While at least a few people in London were glad to see her go, Farrah’s parents and daughter celebrated her return to Texas.

“I’m Home! ????!! Love my family,” Farrah said on Twitter, where she shared pictures of the welcome committee, Sophia dressed up as a “palace princess,” and mother and daughter celebrating the little girl’s latest lost tooth. 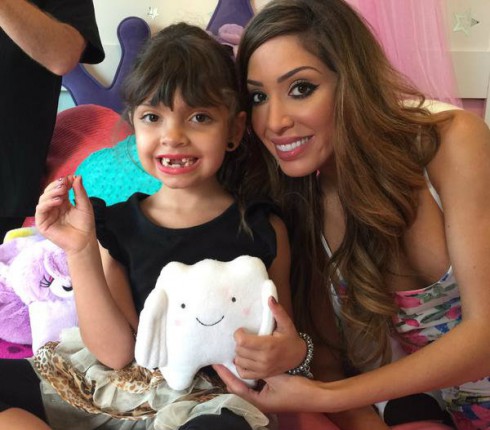 Serving as the Tooth Fairy’s substitute, Farrah quickly tried to make up for lost time with her daughter by rewarding Sophia for her lost tooth with 900 in British pounds (which currently equals $1,361 in U.S. currency!), a new bracelet, and glitter dust.

Score! The Tooth Fairy really upped her game since my day, but also since earlier this year, when she gave Sophia a measly $600 in exchange for her two front teeth.

Although it looks like Farrah and her family are having quite the celebration, she wasn’t able to make a clean break from the other side of the pond: Farrah announced on Twitter earlier this week that she is pressing charges against Aisleyne Horgan-Wallace and possibly Janice Dickinson for “assaulting” her during Bit On the Side. “After speaking with the police and my lawyer, I have pressed charges against Aisleyne and am considering issuing a lawsuit against Janice,” she said. “I can confirm that Aisleyne did assault me and it is now in the hands of the police. Janice hurled a chair aggressively towards me with great force. I was deeply shocked by her aggressive behaviour, especially seeing as she is a more mature lady.”

Police clarified that no arrests have been made and the investigation is ongoing. Farrah may face charges of her own, as British actress Vicki Michelle said she suffered whiplash and a concussion from a glass thrown by Farrah. Regarding that, Farrah said, “As a defence mechanism, I threw an empty Champagne glass towards the wall and unfortunately Vicki got caught in the crossfire 100% by accident.”