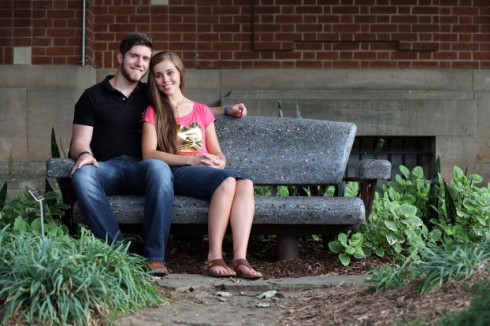 It’s official! Ben Seewald and Jessa Duggar married in Arkansas in front of roughly 1,000 guests today — but opted not to seal the ceremony with a kiss at the altar.

“The big surprise was that there was no kiss during the ceremony,” an insider exclusively told Starcasm.net, explaining the couple retreated to a private room in the middle of the ceremony to have their first smooch. Meanwhile, the minister did a “long, fire-and-brimstone sermon about kissing” and talked about purity. He also directed people to look at Jim Bob Duggar and Michelle Duggar for an example of a Duggar kiss, which they displayed with a brief peck. 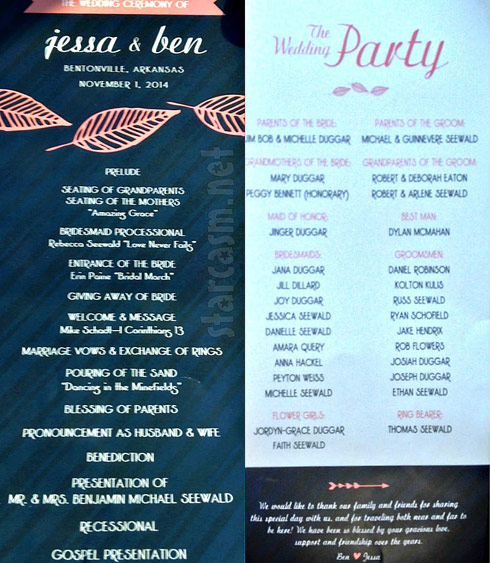 The ceremony at First Baptist Church in Bentonville was heavily monitored with more than 40 security guards who threatened to eject anyone who tried to film or photograph the event. The guests were also encouraged to alert the guards if they noticed anyone sitting near them using a recording device.

“Security was literally staring at people the whole time, threatening to throw them out,” the source said. However, everyone appeared to be in complete compliance with the request and showed a lot of respect for the Duggars — even to the point that none of the female guests wore pants.

For her part, Mrs. Jessa Seewald wore a blush — not white! — gown with cap sleeves, a square neckline and a very sparkly bodice. Based on the first exclusive picture from People, it appears to be this stunning ball gown from Allure Bridal… 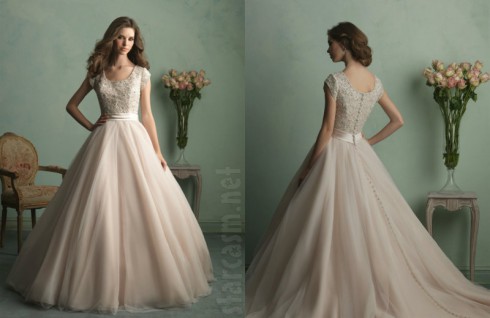 Besides offering an example of a Duggar kiss, Jessa’s parents participated in the ceremony along with Ben’s parents, Guinn and Michael Seewald, by having a private moment on the stage with the couple.

“They formed a u-shape and had kind of a group side-hug and private prayer,” our source said, noting both moms were crying and that it seemed slightly odd. “They sort of crept up to them.”

Our source said the hour-long event was very beautiful and that the newlyweds seemed very happy, although some aspects of the ceremony were nontraditional.

“Jessa and Ben’s wedding was sweet, friendly and private celebration of love, filled with strong reminders about the importance of purity,” the insider said. “With so much talk of their purity, I actually felt I knew much more about the couple than I should.”

Ben and Jessa’s wedding will air on TLC during the next season of 19 Kids and Counting. Their engagement special will air next week.