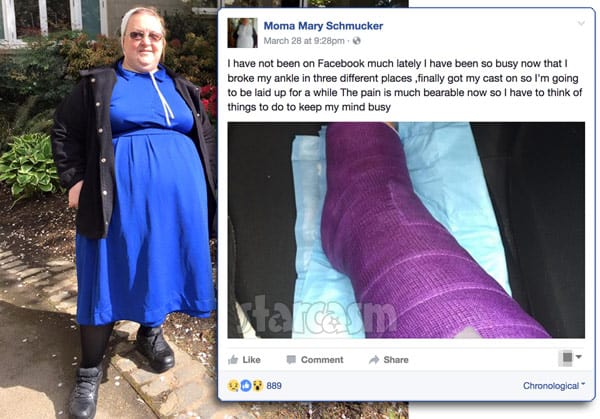 It looks like someone is going to get a lot of afghan making done as Breaking Amish: Return To Amish matriarch Moma Mary Schmucker is recovering after breaking her ankle in three places!

Mary shared the news on Facebook along with a photo of her purple cast: 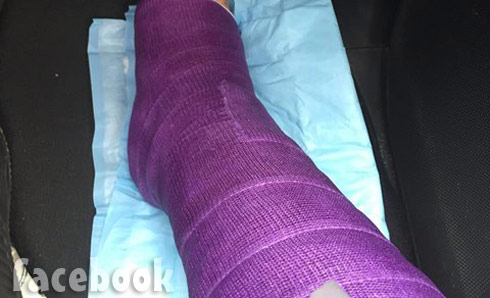 I have not been on Facebook much lately I have been so busy now that I broke my ankle in three different places ,finally got my cast on so I’m going to be laid up for a while The pain is much bearable now so I have to think of things to do to keep my mind busy

The post received hundreds of get well soon comments, as well as TONS of people wanting to know what happened. Unfortunately, Mary never responded to explain just how she broke her ankle. Perhaps it was one too many cranberry Moma Marygaritas?

Mary did respond to inquiries about when Return To Amish will be back for a new season though! “The middle of April as far as I know,” Mary says. I don’t think that can be considered an official announcement, but I think fans can go ahead and get excited that there will more than likely be a new season within the next month or two.

Strangely, TLC didn’t mention Return To Amish at all in the extensive press release issued after their Upfront presentation this week. Perhaps that is what irked Jeremiah Raber enough to share this tweet:

Sad how @TLC picks only certain shows an promotes the hell outta them. The rest R pushed 2 the back just like #breakingamish #returntoamish

Return To Amish returns in November with new cast additions