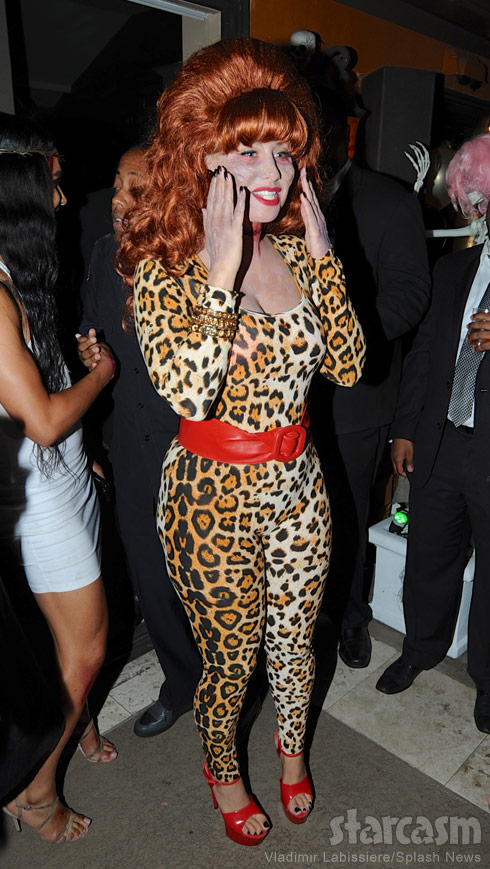 It’s only ten days until Halloween so it seems appropriate that Amber Rose would celebrate her 31st birthday, which is actually today, with a big costume bash Monday night in Los Angeles. Amber, who recently split from her husband (and father of her 20-month-old son, Sebastian Taylor Thomaz) Wiz Khalifa, seemed to be making a bit of a joke at her ex’s expense as she dressed up as a zombiefied version of Married With Children matriarch Peg Bundy.

Amber shared this next selfie on instagram and captioned it, “Al killed me so I came back as a zombie to eat his Brains #ZombiePegBundy” 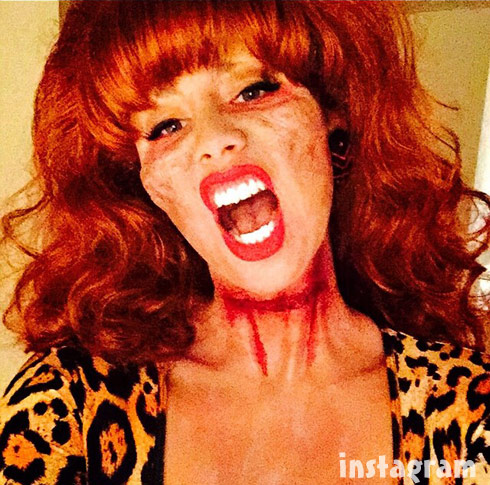 (Get the message, Wiz Bundy?)

In addition to her towering red wig and undead whiteface makeup, Amber packed her famously ample assets into a Peg Bundynamite full-length leopard cat suit that will have men happily seeing spots for days! Here’s Amber showing off her Peg Bundonkadonk while posing for fun photos with Carmen Electra, who was dressed as, um… 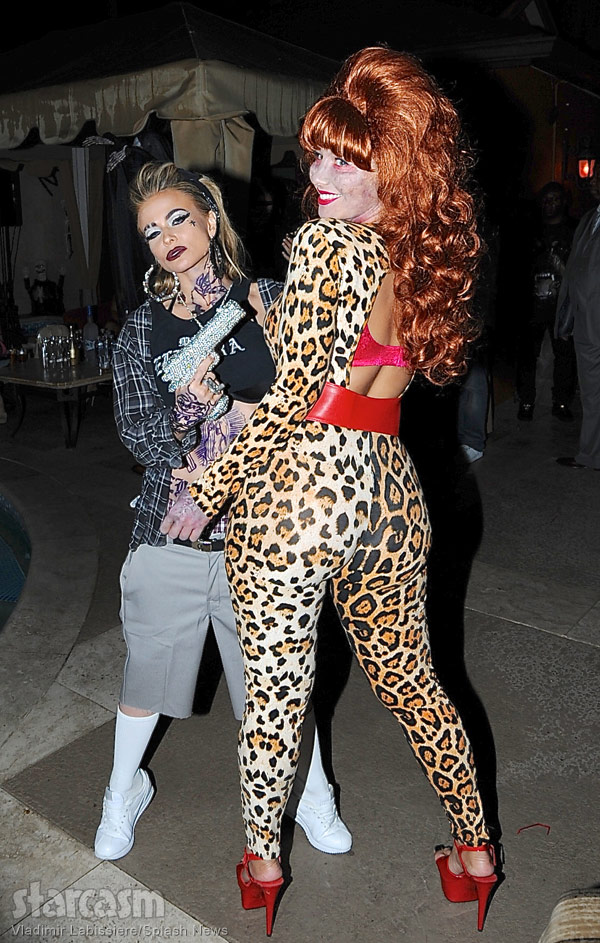 And here’s a great photo of Zomber Rose along with stylist EJ King dressed as a cigar-smoking and beer-drinking pregnant lady: 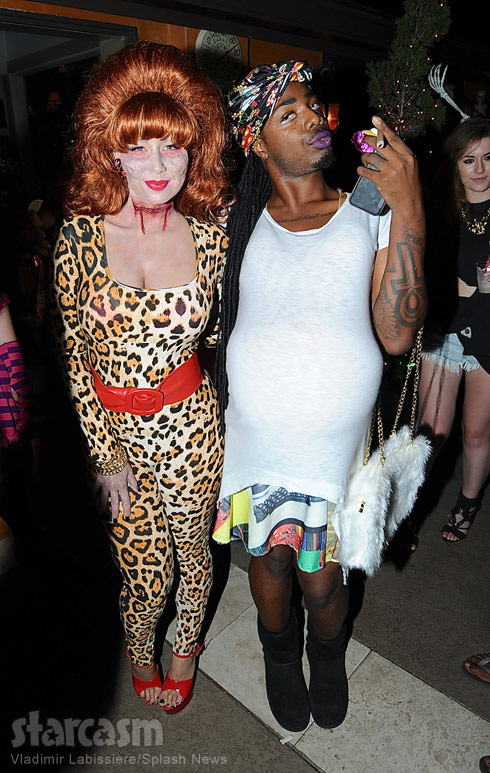 Amber foreshadowed the fun evening with a couple tweets in which she emphasized that she is single and ready to mingle — especially with a certain male demographic. 😉

I know @PriscillaOno & Benji are throwing me a "Surprise" bday dinner. I just don't know who's gonna come…..

And here’s another Amber Rose Peg Bundead selfie from early in the evening:

Ah, but Amber wasn’t the only lady taking advantage oft he first official celebrity costume party of the 2014 Halloween season! Check out model/designer Blac Chyna as she puts the “bad” in bad habit with her revealing nun costume! (Link coming soon!) 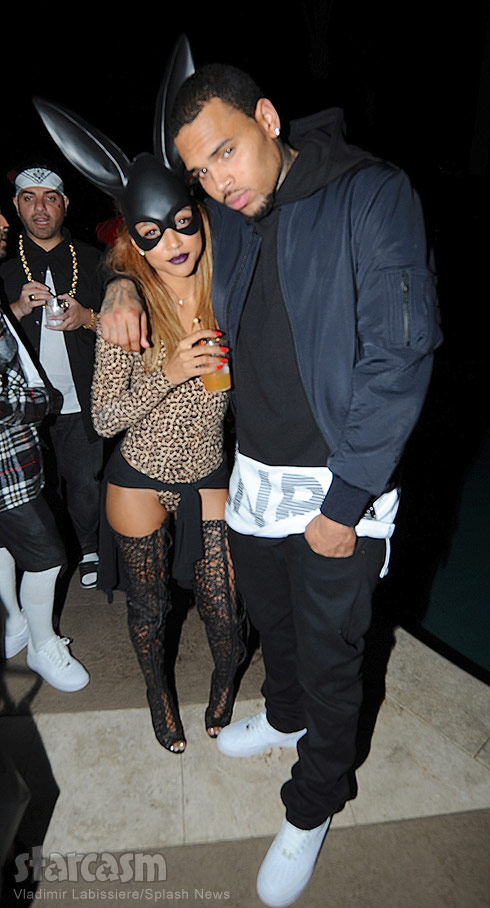 Makeup artist Priscilla Ono showed off her skills dressing as the Cheshire Cat from Alice In Wonderland:

Zombi Peg Bundy and cheshire cat AKA @amberrose AND I

And I will wrap things up with an amazing group photo of the whole party!!! 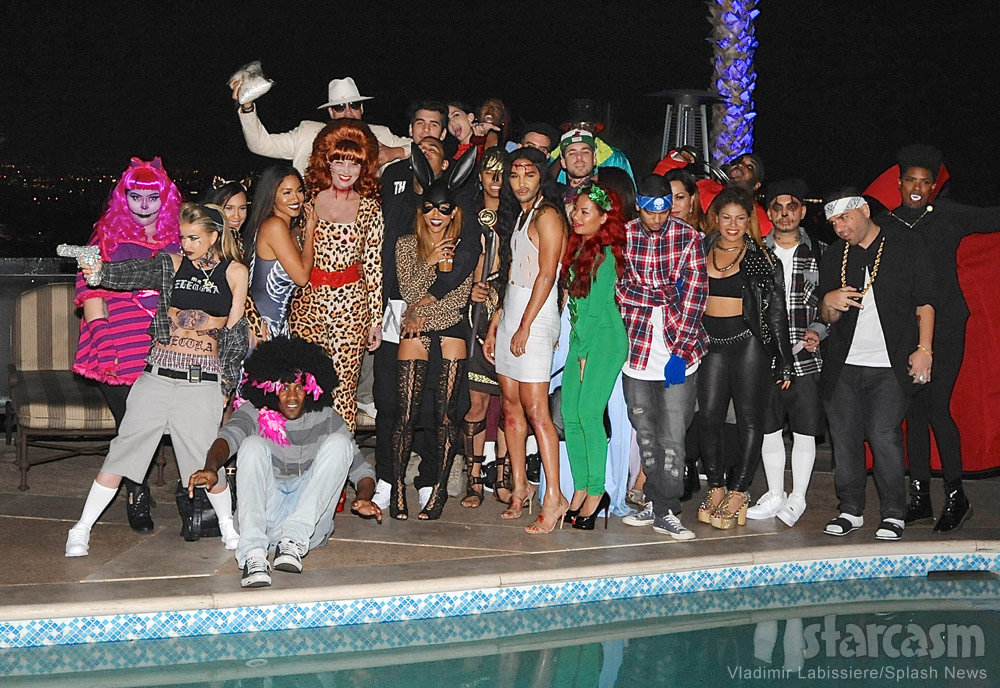 Happy birthday to Amber Rose, and thanks for allowing photographers at your bash! 😉