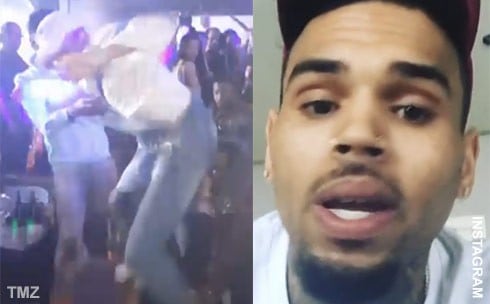 Chris Brown has responded after TMZ posted a video of him trying to stomp a guy in the face at a club in France.

In the video, Brown is seen walking through a crowded venue. A man, later identified as Malek Mokrani, is penned to the ground as Brown kicks down forcefully at his head. Mokrani told TMZ that he had to go to the hospital with neck and head pain and that he intended on filing a police report.

Breezy caught wind of the situation and gave his side of the story in a video posted to Instagram.

Here’s what he had to say:

Let me address this s**t real fast. Hey TMZ, f**k you!. But. I’ll let you know this. Before the tour started I went to Cannes… No fans were hurt by Chris Brown. No fans were beat up by Chris Brown. I met the owner, shook his hand. We were partying and everything else. His staff though, security, I don’t think he probably knew who I was. I don’t care but he assaulted me. Grabbed his hand around my throat and tried to push me out the spot when we were walking. My security was already advancing to another spot so we handled the situation accordingly and moved on… Stop lying to people, saying we beating up fans. I don’t do that.”