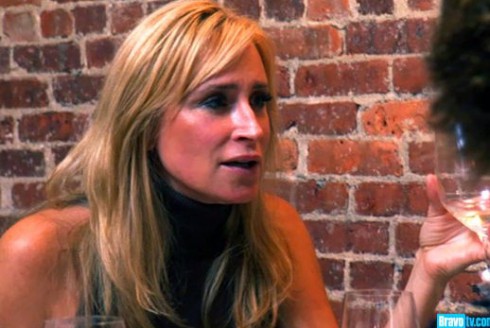 It’s hard to get a real feel about what’s going on with Sonja Morgan this season of Real Housewives of New York. Last season she seemed flirty and a bit spoiled, but she seemed to have her head together.

When last season was airing, she got a DUI; but still, that’s a pretty run-of-the mill offense in Reality TV land. Then we found out that the former wife of a J.P. Morgan descendent had gone bankrupt (mostly because of a failed movie deal.) She did a pretty charming, but odd interview with The Post, but then the new season of RHNY happened. Of course, like all Wives, there can be a little blame put on skewed editing, but the argument we always make is that it’s hard for them to edit what you don’t deliver in the first place.

First of all, Sonja made quite a big deal about being the speaker at a Gay Pride parade (and of course, asking that Alex and Simon NOT be involved when they were asked to, and clearly wanted to), which she tried to defend by making an even bigger deal about it on Watch What Happens Liv. In fact, it was to the point that guest David Arquette still thought it was her party, and not a gay rights parade. (Side note, watching Sonja and David flirt on that episode was priceless. I hope they left the show together.)

Then, of course, we have the whole “pecking order” thing, where she invited newest housewife Cindy Barshop over to give her an intimidating “tea.” She let Cindy know that she should bow down to Ramona because she let her come into “the group” a.k.a “the Show.” Then she explained how nobody wanted to go to Quogue to Cindy’s birthday party (more on the mystery of Quoque to come in another post) and they only went to appease Ramona. Cindy was then tried and convicted of the criminal offense of not having a perfectly chilled glass Pinot Grigio waiting to drop into Ramon’s hand the moment she arrived. In essence, it was a far more coherent version of Kelly’s “I’m up here, and you’re down there” speech to Bethenny in the 2nd Season, but no less ridiculous.

She’s dressed in two skimpy costumes that seem to be lacking a bottom half, once in a baseball number that flew up in the wind and revealed her hose-encased booty while she threw the first pitch for an ASPCA NY firemen calendar.

In another episode, she wears a Marie Antoinette costume that was also the right length for a three-year-old, and exposed her underside again when she bent over because she forgot to put on her bloomers. It was like one of those dreams when you forget to wear clothes to school or work.

Has Sonja come a bit unhinged? If so, great. A crazy Real Housewife is a successful Real Housewife, and maybe that is exactly the angle Sonja’s playing. Teresa turned her crazy into best-selling cookbooks. Coincidentally Sonja also wants to sell cookbooks of the toaster oven variety.

Did NeNe Leakes get a boob job?