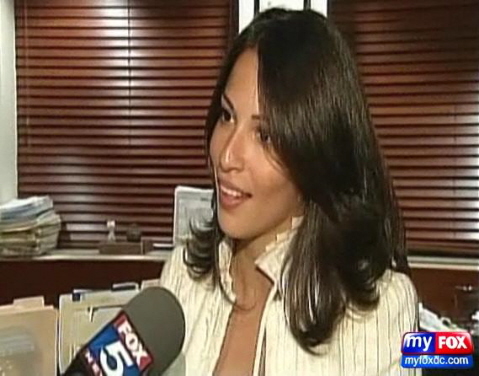 Debrahlee Lorenzana of New York City is unquestionably sexy, but is she too hot to be employed?

The curvaceous stunner is claiming that her natural assets caused her to be fired from her job as a banking officer at the Chrysler Building branch of Citibank.  After receiving a number of what she felt were inappropriate requests to tone down her wardrobe, she filed a formal complaint with HR and requested a transfer in May of last year.

Her court filings claim that this transfer request was denied and she was subsequently stripped of some of her duties, and then not given proper training for her new ones.  She eventually was transferred in July but the situation only worsened.  According to her suit, she was moved to an out of the way post on the second floor where she was then chided for failing to recruit new customers despite being given the poor office space to work from.  In short order she was fired in August.

Some of the more eye-opening allegations in Lorenzana’s court filings include:

“Shortly after the commencement of her employment, branch manager Craig Fisher and assistant branch manager Peter Claibourne began articulating inappropriate and sexist comments concerning plaintiff’s clothing and appearance.” The filings go on to say, “The improper comments made to plaintiff by Fisher and Claibourne included, but were not limited to, advising her that she must refrain from wearing certain items of clothing, in particular, turtleneck tops, pencil skirts, fitted business suits, or other properly tailored clothing.”

“In blatantly discriminatory fashion, plaintiff was advised that as a result of the shape of her figure, such clothes were purportedly ‘too distracting’ for her male colleagues and supervisors to bear.”

Here is a two-part report filed by myfoxdc.com on Lorenzana’s situation.

On Lorenzana’s public Facebook page she is posting articles about her ordeal and in response is receiving positive comments from friends who feel that she has been unjustly fired.  In a statement by Citibank the company said, “We believe this lawsuit is without merit and we will defend against it vigorously.” Lorenzana is still working in the banking industry for a new company. She is also wearing the same curve-accentuating wardrobe but without the complications this go around.