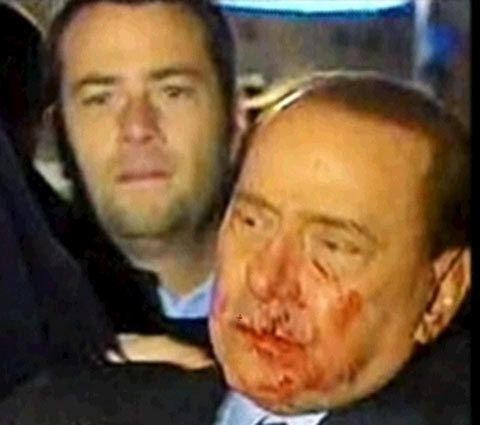 Prime Minister Silvio Berlusconi, who’s currently embroiled in a number of corruption and sex scandals, was hit by a statuette at a rally Sunday by mentally ill graphic designer Massimo Tartaglia, breaking his nose and knocking out two of his teeth. Although the attack immediately brought the sight of blood, the 73-year-old billionaire was not seriously injured and is recovering well though he is still in pain and is having trouble eating.

42-year-old Tartaglia was arrested on the scene, which was in his best interest since there are rumors that the crowd was ready to lynch him.

Berlusconi had just finished a rousing speech to supporters of his People of Freedom party when he was hit with the statuette. Although there was a group of protesters, his attacker, Tartaglia is said to not be among the group of dissenters.

“I want to lick your soul” Donald Kohut seduced by sadistic murderer Christa Pike, tries to break her out of death row

Jared Fogle allegedly spent ‘at least’ $12,000 a year on prostitutes