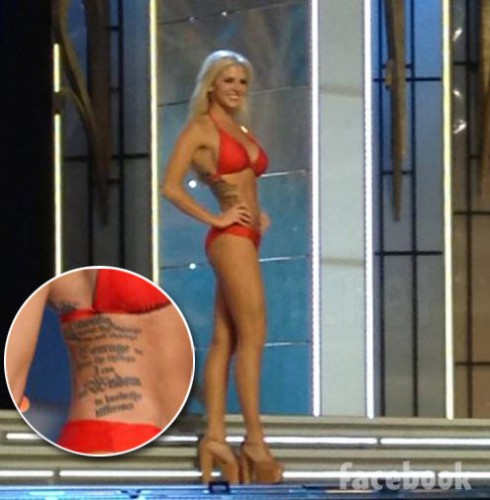 Miss Kansas Theresa Vail has been making headlines this week as she announced she will be the first Miss America pageant contestant to openly display a tattoo during the competition. The 22-year-old Kansas Army National Guard Medical Detachment Sergeant participated in the preliminary swimsuit competition Tuesday night in Atlantic City and we have the very first photos of Theresa and her rather sizable side tattoo strutting the stage for the judges!

Sadly, the photos we have (so far) are of rather low resolution so we can’t see the tat very clearly. But, thanks to Theresa’s openness about her ink, we know that the tattoo, which is on her rib cage on her right side, is the Serenity Prayer, which reads:

Theresa also has the insignia for the U.S. Army Dental Corps tattooed on her left shoulder, but it is not visible in the photo above. (I believe it is small and would not have been very clear in the image anyway.)

We will update the post as soon as we get any higher-quality images from our photo agencies. (Wehope they had at least one photographer in Atlantic City for the event!)

UPDATE – Here’s a great shot from Twitter (you may need to give it a minute to load):

Here is a photo of Theresa at the Miss Leavenworth County pageant in December of 2012 wearing a bikini with her tattoos covered. You can see the slight discoloration on her right side where the tattoo is: 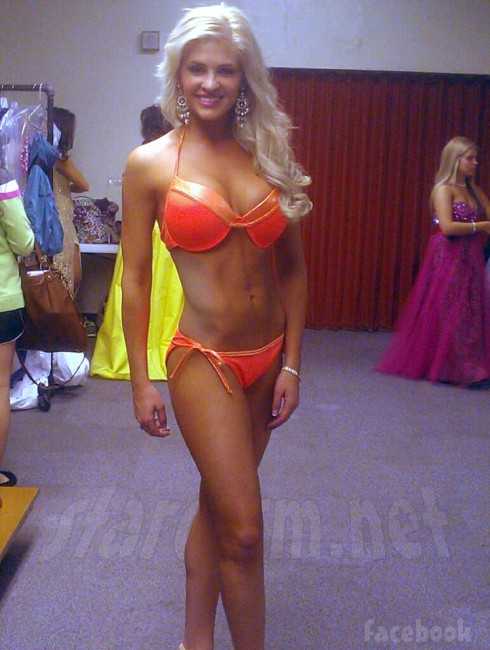 * By the way, Theresa credits her AMAZING physique to trainer Donovan Seay and I feel obligated to give credit where credit is due because Donovan is obviously fantastic at what he does!

Theresa discussed unveiling (unVailing?) her tattoos on her blog back in August, and made it very clear that she does not take tattooing lightly:

As I was growing up amidst the bullying and neglect, I found myself asking God on a daily basis to give me peace in knowing I cannot change certain things about myself, but also asking Him to give me the strength to change things that I had the power to. Praying to Him for these characteristics got me through my adolescent years, high school and boot camp. When I was 20 years old, I knew I wanted to always be reminded of my past and its connection to this prayer. Thus, I chose to have it tattooed onto my body. I have no regrets.

The second is the military medical insignia. Though much smaller than the prayer, the significance is just as great. Since I was a child, God placed a strong passion for service into my heart. Service to my Country, and service to people through medicine. In the middle of this symbol is the letter “D” to represent my dad, whose influence was paramount in choosing this career path.

As you might have noticed, I did not mention dragons, flowers, hearts or other frivolous items as one of my tattoos. I am a firm believer that lengthy and conscious thought should be given before getting “inked.” I am also firmly against (personally) getting a tattoo for the sake of getting a tattoo. All too often I run into individuals that have no rhyme or reason for the choice they made, other than “I just wanted one.” Most likely they will regret their decision after a few years.

Sadly, Theresa didn’t win the swimsuit preliminary round tonight — that honor went to Miss Mississippi, Chelsea Rick, who was awarded a $1,000 scholarship for lifestyle and fitness in swimwear, sponsored by Catalina swimwear.

No worries, though! Theresa can still take this thing! #CrownTheCamo

Just in case you were wondering what Theresa looked like in uniform and as a brunette, we’ve got both covered with this photo from November of 2011 featuring Theresa and her dad, which she captioned, “Everything I aspire to be…” 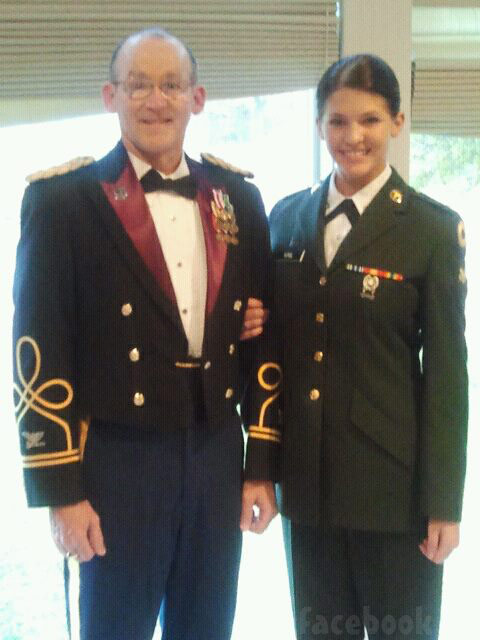 If you wanted Theresa Vail as a brunette, but not necessarily in uniform, we’ve got you covered there too! Here’s another photo of a dark-tressed Theresa looking absolutely lovely while attending a wedding in October, 2009. (Once again, Theresa is posing with her pop.) 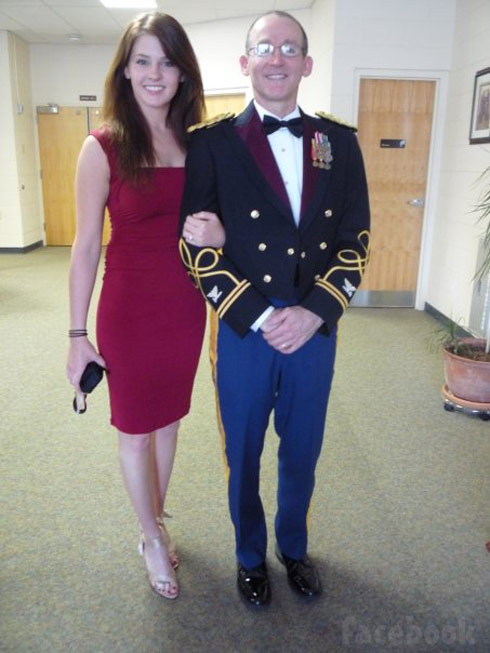 And if you’re curious to know more about Theresa, be sure to check out our previous post on her!