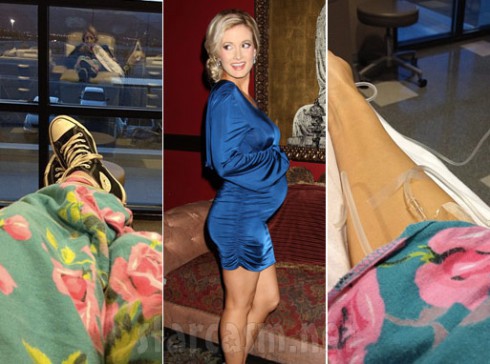 Holly Madison was checked into a hospital yesterday with an extreme case of morning sickness. The reality star posted two photos via Twitter showing herself hooked up to an IV stating, “Almost seven months and morning sickness took hold! Glad to be otherwise OK, though.”

This news comes on the heels of Kate Middleton’s pregnancy announcement, which many believed was made public because she was suffering from Hyperemesis Gravidarum, a rare disorder characterized by severe and persistent nausea and vomiting during pregnancy. Because of Kate’s condition, she too was admitted to the hospital.

As Holly stated, she’s almost 7-months-along in her pregnancy while Kate is early on. Many of Madison’s followers and fans sent her well wishes for which she was very appreciative. She tweeted:

Madison is expecting her first child with Pasquale Rotella.