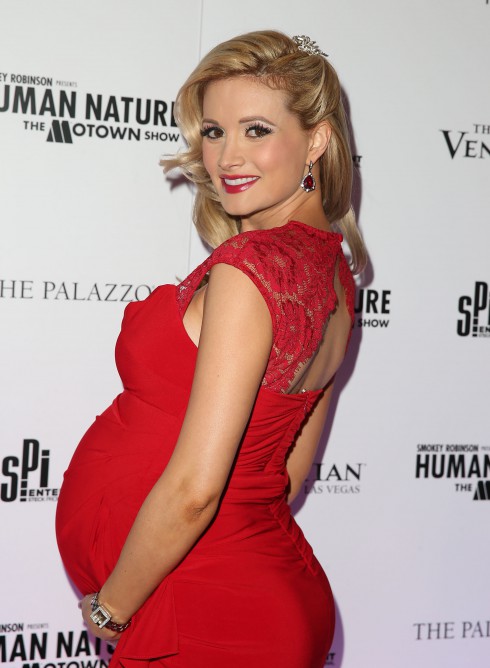 Holly Madison’s baby is almost here! The former Girls Next Door star and her club promoter boyfriend Pasquale Rotella are currently in the hospital awaiting their baby girl. But before she was admitted, she revealed all of her exciting plans for the future with her baby — including a television special.

“It’s time now. We have decided to induce the delivery if necessary,” Holly told Las Vegas Weekly. “I will go in Monday afternoon or early evening. It still might take up to three more days, though.”

“I’m feeling very relaxed, very, very happy, contented, yet a little restless with anticipation, but all is good,” Holly revealed. “I’m ready now for the delivery. I can’t wait to be a mommy. These are the happiest days of my life.” And as for Pasquale, Holly says, “He’s as excited about it as I am — maybe more!”

Holly also hinted at her little girl‘s name saying, “We have her name picked out, but that has to remain a secret for now . . . It’s such an unusual and difficult name I have a feeling we’ll add something simpler once she’s arrived safely in our world.”

UPDATE – Holly has revealed to In Touch that she will be having her baby tonight, March 4! “I just got clearance to go into the hospital tonight at 10 p.m.” Holly shared with the magazine. “I couldn’t be more thrilled! Pasquale and I are so excited to meet our baby girl.”

Last night, Holly and her man enjoyed their final night together with a visit to her friend Claire Sinclair’s new show. During their evening out Holly tweeted, “Top of the World at Stratosphere-last romantic dinner before baby!”

Speaking of dinner, Holly recently revealed plans to consume her own placenta — but it’s all in the name of good health. “This might sound gross, but I’m totally planning on having my placenta turned into pills I can take after giving birth,” she wrote in her Celebuzz blog. “I heard it helps women recover faster and I want to recover as quickly as I can!” Yum.

Holly is currently filming a television special and while she didn’t reveal much about the show, she did confirm that her visit to Claire’s show would be a part of it and that it would be airing on E!