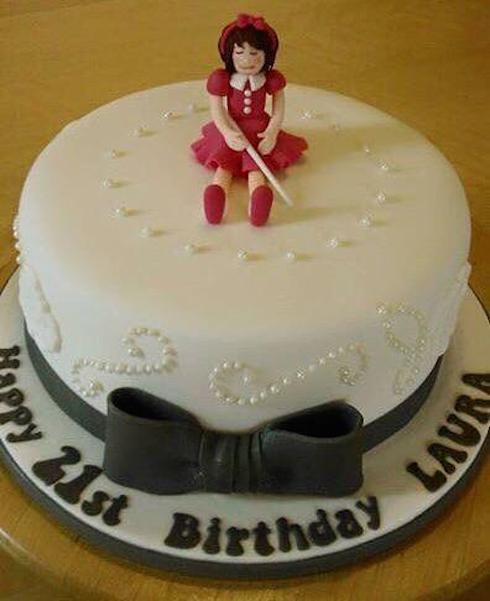 A Scottish woman has become a viral sensation thanks to her good humor in the face of a major autocorrect fail.

Emily Segge, of Lanarkshire, recently took to Twitter to share a photo of her sister’s 21st birthday cake. The cake, which you can see above, is a good piece of work! It’s handsomely done; it’s simple, yet elegant; it says “Happy 21st Birthday LAURA.” All of these details are both appropriate and factually accurate.

The problem, then, is the cake topper, which is of a “wee blind girl.” Because that’s what Segge asked for atop this celebratory concoction–yes? Well…no.

The autocorrect fail came after Segge asked for a “wee blonde girl” to top the birthday cake. Because of technology, she got a wee blind girl instead–complete with dark hair, a forlorn, “when-will-it-all-end” look, and a toothpick for a cane.

My mum ordered a cake for my sisters bd n asked for a blond girl on top but it autocorrected to blind n we got this pic.twitter.com/SeAoETigfw

According to a screen capture of the actual exchange, Emily requested “Plain white balls dotted with a gray ribbon and bow,” offered to buy those herself if the baker didn’t have time, and then said “Would you be able to put a wee blind girl in top if not it’s fine.”

Segge later told Buzzfeed “They then realised what had happened after checking the text and decided to leave it on as was funny. Hope no one is offended.”

This isn’t the first time in 2015 that a British baker has charted a course through controversial waters–though it is the first time that an autocorrect fail is to blame for the navigation. Devotées will recall the story of the teddy bear vagina cake, which rocked the British Isles just a few short weeks ago.