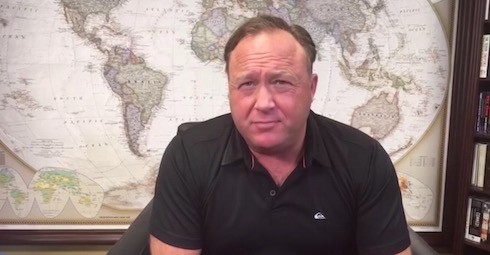 Alex Jones, the InfoWars.com founder whose connections to Donald Trump made him an increasingly prominent media figure throughout the 2016 presidential campaign, is best known to the general public as the public face of a host of conspiracy theories. Jones is responsible for pushing the belief that the U.S. government faked the Sandy Hook massacre in order to push a gun control agenda; he’s claimed that the government was actually behind the 1995 Oklahoma City terror attack; and he was one of the earliest and most ardent pushers of the idea that the government was also behind the September 11 attacks.

(For good measure: Jones also believes that the moon landings were faked so that NASA could hide its top-secret space technology, and that the Clintons were involved with a human trafficking and child sex ring operating out of assorted East Coast pizza parlors.)

But today, Alex Jones wants everyone to know that he doesn’t necessarily mean any of what he says. He and his ex-wife Kelly Jones are in the middle of a child custody dispute over their three children: a fourteen-year-old son and twelve- and nine-year-old daughters, all of whom have lived with Alex Jones since he and Kelly divorced in 2015. And Alex’s counsel has taken the unusual tack of arguing that everything Alex Jones says in his capacity as InfoWars’ conspiracy engine is mere entertainment.

“He’s playing a character,” argued attorney Randall Wilhite, according to the Austin Statesman. “He is a performance artist.” Wilhite also claimed it’s unfair to use Jones’ on-air personality as a yardstick for measuring his capacity as a father, saying that to do so would be (in the Statesman‘s words) “like judging Jack Nicholson in a custody dispute based on his performance as the Joker in Batman.”

@pattonoswalt The good people of Newtown, Connecticut, can explain the difference between Jon Stewart and Alex Jones in crystal clear terms.

Kelly Jones also argued the exact opposite. Since Alex Jones records for InfoWars from his home, she says, it’s impossible to separate the “entertainer” from the father even without taking the definition of “entertainer” into account. In what the Statesman called “emotional testimony,” Kelly told the court she saw no such separation: “He’s not a stable person,” she said. “He says he wants to break Alec Baldwin’s neck. He wants J-Lo to get raped. I’m concerned that he is engaged in felonious behavior, threatening a member of Congress. He broadcasts from home. The children are there, watching him broadcast.”

(Jones threatened to “beat” California congressman Adam Schiff’s “goddamn a$$” earlier this month, and also kind-of-sort-of challenged him to a duel with pistols.)

By making the trial about Alex Jones’ intentions as a media personality, his attorney has to some extent reduced the trial to one question: Is Alex Jones just acting? Given the size of Jones’ audience–he has over two million followers on YouTube alone–and the seriousness with which they take his suggestions, it may sound like an easy question to answer.

But, as Jezebel points out, there’s a long history of famous men claiming to be entertainers only when doing so suits their legal purposes. Terry Bollea did so in his capacity as Hulk Hogan when suing Gawker; Woody Allen, Mel Gibson, and Roman Polanski “have all been granted the luxury of having their work separated from their flawed manhood.” The same is also true of Donald Trump, who said in 2015 that his disparaging comments about Republican primary challenger Carly Fiorina were made in his capacity as an entertainer, and not as a presidential candidate.

The Jones’ trial is expected to last two weeks.