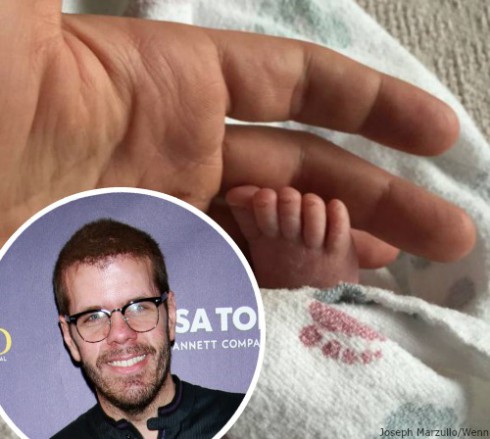 Perez Hilton is now outnumbered: The single dad welcomed his second baby on Mother’s Day. As could be expected, he announced the big news on his blog.

“It is with great pride and relief that I can finally announce: I am a dad again,” Perez, 37, said. “The road to this birth has been a difficult journey, quite different from the first time, and my son and I are overjoyed at this happy and healthy addition to our family.”

Perez welcomed his first child, a son named Mario, in February 2013. Shortly after that, he explained he “didn’t want to keep waiting” for a partner before having kids. Mario was carried by a surrogate; it’s still unclear whether Perez went the same route for baby No. 2. We’re also awaiting word on the name and sex.

UPDATE In an interview with The Associated Press (via The Huffington Post, Perez said the new baby is a girl named Mia Alma. He said the moniker means “my soul” in Spanish and he selected it “because I’m cheesy like that.”

Perez also confirmed Mia was carried by a surrogate. He added he is eager to introduce Mia to older brother Mario soon, explaining, “I’m excited for the two of them, so they can have each other and my son can look after her. It’s a real family now.”