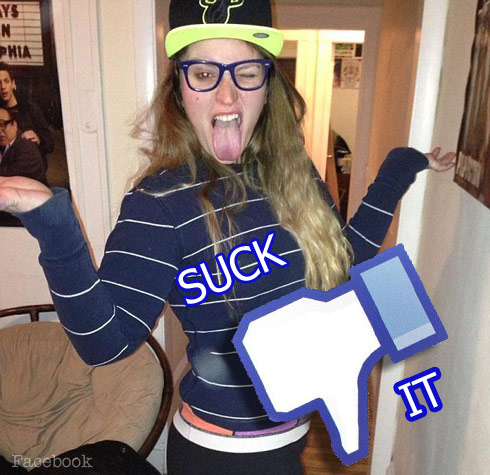 A former head of a private school in Miami, Florida has been denied an $80,000 discrimination settlement after his teenage daughter boasted about the court’s decision via Facebook.

69-year-old Patrick Snay, the former head of Gulliver Preparatory School, filed an age discrimination lawsuit against his previous employer when his 2010-2011 contract wasn’t renewed. When the dust settled, an agreement was reached in which Snay would receive an $80,000 settlement and $10,000 in back pay. Gulliver also agreed to pay Snay’s attorneys $60,000.

What was obviously a huge financial victory for Snay was almost immediately dealt a harsh blow when his teenage daughter, Dana Snay (above), took to Facebook to brag about the situation. “Mama and Papa Snay won the case against Gulliver. Gulliver is now officially paying for my vacation to Europe this summer. SUCK IT,” she wrote.

You see, as part of this settlement Papa Snay had signed a confidentiality agreement… Whoops! This agreement included a clause in which Snay agreed that he and his wife would only discuss the settlement with attorneys or other professional advisors.

Dana had over 1,000 followers / friends / or whatever you call them these days on Facebook – including a number of students at Gulliver. The braggadocio post quickly got back to the school’s reps who quickly got a hold of their lawyers who just as quickly contacted Snay’s lawyers to let them know that their client was in breach of the agreement and would not be getting the $80,000 settlement payment.

Snay reacted by filing a motion in a Circuit Court to uphold the ruling and he won. The school then appealed and last week the Third District Court of Florida agreed that Snay had violated confidentiality and reversed the Circuit Court ruling.

“Snay violated the agreement by doing exactly what he had promised not to do. His daughter then did precisely what the confidentiality agreement was designed to prevent, advertising to the Gulliver community that Snay had been successful in his age discrimination and retaliation case against the school. Based on the clear and unambiguous language of the parties’ agreement and Snay’s testimony confirming his breach of its terms, we reverse the order entered below granting the Snays’ motion to enforce the agreement.”

In layman’s terms, the court told Snay to “suck it.”

“What happened is that after settlement, my wife and I went in the parking lot, and we had to make some decisions on what we were going to tell my daughter. Because it’s very important to understand that she was an intricate part of what was happening. She was retaliated against at Gulliver. So she knew we were going to some sort of mediation. She was very concerned about it. Because of what happened at Gulliver, she had quite a few psychological scars which forced me to put her into therapy. So there was a period of time that there was an unresolved enclosure for my wife and me. It was very important with her. We understood the confidentiality. So we knew what the restrictions were, yet we needed to tell her something.”

Snay is now the headmaster at Riviera Preparatory School in Coral Gables, Florida.

Papa Snay can still appeal this decision to the Florida State Supreme Court.

So who do you blame more for the situation? Snay and his wife or their daughter?