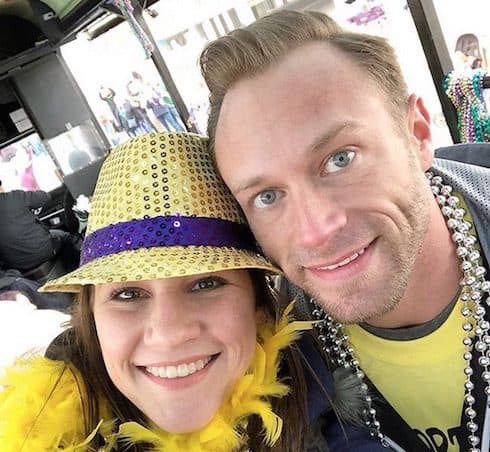 The latest Outdaughtered Season 4 update sees the Busby family dealing with some unexpected controversy as filming of new episodes continues. It seems that Busby followers were largely dismayed by one of Adam’s most recent social media updates, in which he inadvertently revealed that he’d let eldest daughter Blake, 6, wear lipstick to a father-daughter Valentine’s Day dance.

We say “inadvertently” since it appears Adam’s intent was just to share a sweet photo of he and Blake. And of course, thanks to the initial of articles covering the controversy, there’s since been a counter-wave of comments from fans with positive things to say. Here’s the photo in question; see it for yourself:

The next day, though, Adam shared a second photo from the night before — only this time, as a gentle response to the controversy, he brought a strong caption game. All the most successful reality TV stars know how to use social media to manage a controversy, whether big or small; Adam, who shut down rumors that he and Danielle are getting divorced with a single straightforward tweet, has now done so twice in three months:

My biggest motivation to be a great father and leader for these girls, so they don’t expect anything less from the man they will marry one day. Love Christ first, love their mother well and love them BIG. #daddyslittlegirl #outdaughtered

(Of course, social media allows for plenty of mistakes, as well — like when both Adam and Danielle accidentally gave us a premature Outdaughtered Season 4 update by sharing photos of a camera crew filming them well before TLC announced any renewal.)

In other news, Rush Cycle, Danielle and Adam’s fitness studio, has gotten favorable press since opening up last summer, meaning it’s all the more likely that Outdaughtered fans will get to see how the Busbys balance six kids and their latest endeavor when Season 4 drops.

Danielle recently spoke candidly with Houston’s ABC 13 about how the studio fulfills a need she felt to accomplish something for herself. It sounds like the tension from Danielle’s Season 3 announcement that she wanted to work more than she and Adam had planned was well worth it for her:

I was known as the quint mom. I always do for the house, the kids, cook, clean and change diapers all day, but nothing made me feel accomplished like my career used to. [Rush Cycle] fills the Danielle bubble, I guess. I’m still important, and I still have things that revolve around something else besides changing diapers. I encourage all moms out there to find that something to fill your bubble. What do you need for you because you do so much for everybody else.

One thing we don’t know is if Outdaughtered Season 4 will do a full Curse of Oak Island-style deep drill toward the show’s core mystery: whether or not the Busbys actually employ a rotation of top secret nannies working behind the scenes at all times to keep everything spotless 🙂

Though TLC has yet to make an official announcement about Outdaughtered, the network has yet to let more than six months pass between seasons — and Season 4 is expected to begin airing sometime this spring.