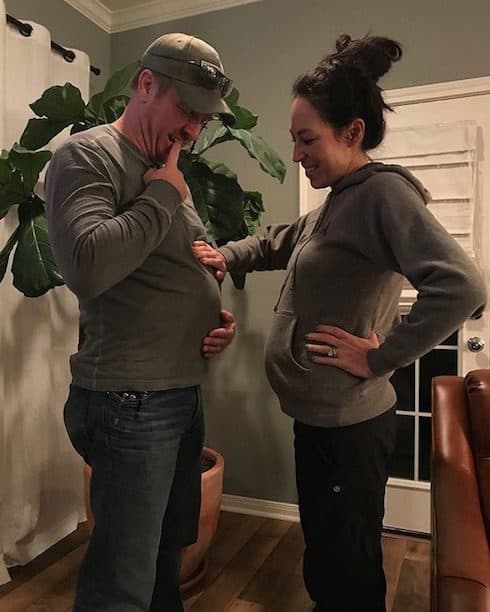 Now that Joanna Gaines has entered her second trimester, the Fixer Upper star has begun to share a bit more about her pregnancy, even as Joanna takes more control over how and when that information gets covered. She teased the first official Joanna Gaines baby bump photos this week — though you might have a hard time finding them.

Joanna and Chip announced her pregnancy with the above super-cute photo of the two of them sporting bumps: hers from baby #5, and his from too many big holiday meals. Since then, we’ve managed to figure out Joanna’s due date, but we haven’t gotten many more pics of Joanna, and none of any Joanna Gaines baby bump.

That is, until this week, when Joanna revealed she’d recently sat for a proper pregnancy photoshoot. The teaser on her Instagram page is more a hint of a bump than a full-blown belly, though it’s worth noting that the upload also represents the first photo of just herself that Joanna has shared since before she and Chip’s announcement. The Gainses are playing a bit of a Kylie Jenner game with Joanna’s pregnancy; so far, it appears to be working:

A few hours later, Joanna gave us a second pregnancy update as well as a beautiful advertising pirouette by managing to turn a post about pregnancy cravings into a plug for her forthcoming cookbook. If there were a social media Olympic Games, shy, retiring Joanna Gaines would be in serious contention for a medal:

Woke up this morning at 2:30 AM and was craving fruity pebbles, a pimento cheese sandwich, chicken spaghetti, deviled eggs, and ranch dressing. Didn't have any of that so I made myself some cookies. With all the restaurant's final tastings, the cookbook (yes these cookies are in it!), and this pregnancy-I'm definitely growing at a record rate??#magnoliatable

Despite her admirable message control, the best Joanna Gaines baby bump pics to date turn out to be a set of candid shots taken by Texan photographer Grace Marie. Grace happened upon Joanna and Chip filming for Fixer Upper in front of Magnolia Table, their first-ever foray into the restaurant business, and captured the pics below. Joanna may be keeping things subdued with a hoodie, but her bump is just peeking through: