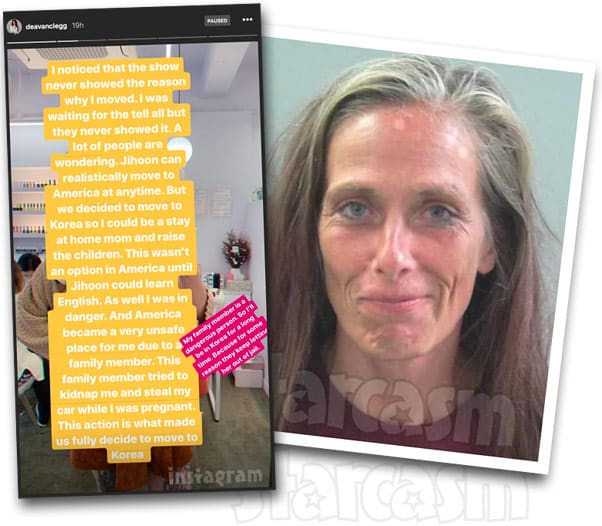 Show star Deavan Clegg took to social media after the second half of the Tell All aired to reveal that producers decided to leave out her explanation for moving to South Korea instead of having her husband Jihoon move to the United States. Deavan says one of the main reasons is that she doesn’t feel safe in the United States because of a “dangerous” aunt who tried to kidnap her and steal her car when she was pregnant!

Deavan made the reveal with an Instagram story post on Tuesday. Here is the full text from her statement:

I noticed the show never showed the reason why I moved. I was waiting for the Tell All but they never showed it.

A lot of people are wondering. Jihoon can realistically move to America at any time. But we decided to move to Korea so I could be a stay at home mom and raise the children. This wasn’t an option in America until Jihoon could learn English.

As well I was in danger. And America became a very unsafe place for me due to a family member. This family member tried to kidnap me and steal my car while I was pregnant. This action is what made us fully decide to move to Korea.

My family member is a dangerous person. So I’ll be in Korea for a long time. Because for some reason they keep letting her out of jail.

90 Day Fiance Instagrammer John Yates shared Deavan’s post and responded to followers asking about the identity of the family member. “I believe it’s her Aunt,” John responded, “she told me a story long ago and I think that’s who she’s talking about.”

Another commenter mentioned that one of Deavan’s aunts had recently committed suicide, but Deavan made sure to clarify that it was not the same aunt. “Different aunt, my eldest aunt and then her sister is my aunt who died,” Deavan wrote.

Deavan had a couple more interactions:

COMMENT: Really? Does anyone know why her aunt would do this??

COMMENT: My guess would be the family member is a catty, petty female who regards ALL women as competition, and is incapable of being rational and logical.

Deavan has an aunt named Melissa that has had numerous run-ins with Utah police over the past year and a half. Here is her mug shot photo and a timeline of some of her arrests with the charges: 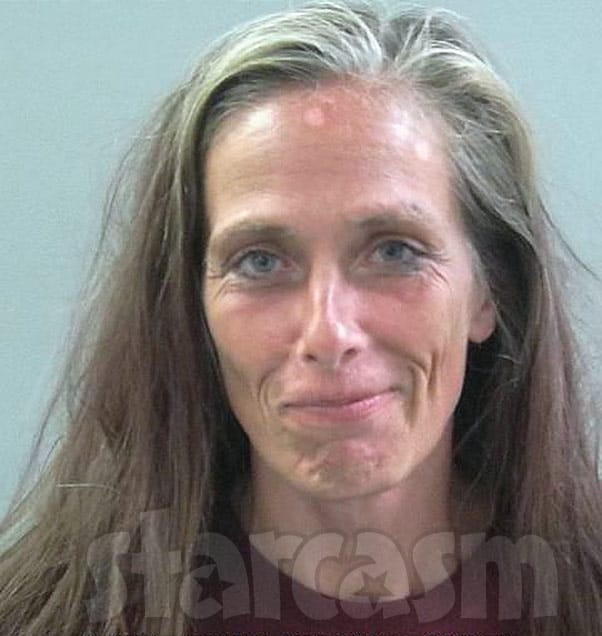 July 22, 2018 – Assault, Commission of Domestic Violence in the Presence of a Child

It’s unclear if the alleged attempted kidnapping was when Deavan was pregnant with her son Taeyang, or when she was pregnant with her daughter Drascilla. Jihoon and Deavan first met in person in August of 2018, so she would not have been pregnant at the time of Melissa’s assault and domestic violence arrest in July. She gave birth in April, so that was before Melissa’s trespassing arrest on the Fourth of July.

In August of last year, Melissa made a series of concerning Facebook posts in which she talked about needing a car and a place for her homeless friends to take a shower. Those posts were followed on August 15 with the following message:

If anyone has questions about Melissa, or concerns. Please talk to Elicia. She will give you information you need. I do not wish to air dirty laundry in public, but please, if you are talking to Melissa or in contact with her, it is in her best interest for you to talk to Elicia. Thank you.

Melissa has a blog and has been quite open about her struggles with mental health. Here is one of her posts from May of 2016:

Do you know that I take anti-depressants and anti-anxiety medication?
I do.

I need to, I see a Psychologist. I feel no shame in this, I need help to regulate my “moods”… I have Clinical Depression and Severe Anxiety and PTSD…

But more than that, I am a Wife, a Mother and so many more things. Some days I struggle just to leave the house.

I am not crazy.

This is my life, and I am fighting for it.

#90DayFiance #TheOtherWay couple @deavanclegg and @jihoonlee90dv had their formal wedding ceremony in South Korea this weekend, and we have a leaked photo! Check out Deavan and Jihoon looking cake topper perfect as they pose with Deavan's daughter Drascilla, son Taeyang, mother Elicia, dad Steve, and sister Raven! We don't know a lot about the ceremony (yet) but we do know that there was a TLC crew there filming. Congratulations again #DeavanAndJihoon!

Melissa took more than a month off from Facebook after her July 4th arrest, returning on August 6. “Hi all, I just wanted you to know, I am alive, and well,” she wrote. “I want peace, and others have sacrificed so much. Please understand this has been a mission of GENERATIONS. Love you all. 🙂 ”

The post elicited numerous supportive comments, but Deavan’s mother Elicia was having none of it. “Everyone liking and hearting her comment should be ashamed,” Elicia wrote. “You are enabling an extremely dangerous woman.”

I couldn’t find any photos of Melissa and Deavan together, although Deavan was in attendance at Melissa’s wedding in 2010. Speaking of Melissa’s wedding, she shared a wedding photo with her sister Elicia in March of 2015 and reflected on the bond they shared after suffering through a very difficult childhood together. (There was also a photo of the two of them as young children in the arms of a grown man.) 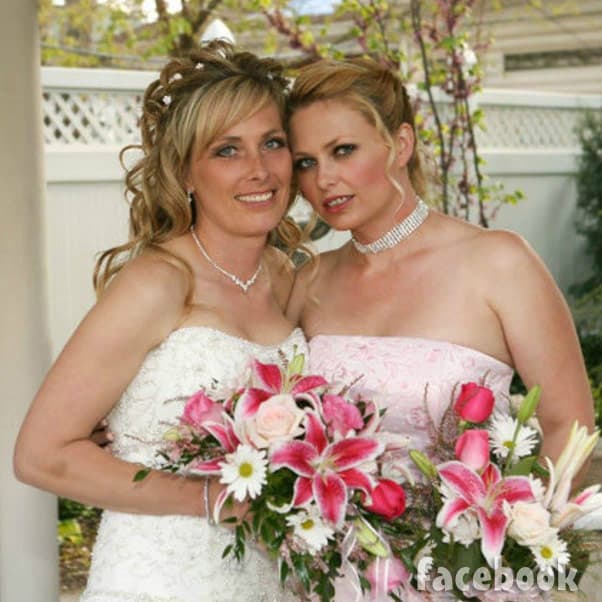 I met one of my very best friends on the day she was born, I am lucky enough to call her a sister as well… I took care of her, always, well not always, but I tried… I watched out for her… We have been thru so much… We know stories that only her and I share, we know the depths of Hell, and how walk thru Hell with each other. I can always count on her…. Most times I don’t even need to ask. We have argued and fought like sisters sometimes do… There have been those who have tried to break the bond that holds her and I together, they failed and will continue to fail.

It is her Birthday today! So if you could all please help me and go send her a wish on her Author Page. I would so appreciate it…

Happy Birthday Elicia! I love you so much and am so grateful we got to make this journey together! (I fought hard with myself to leave the monster in the picture… but I know you like the picture because we look happy… we deserved more happy childhood moments. 😉 )

It’s unclear why 90 Day Fiance: The Other Way producers would choose to not include Deavan talking about the alleged kidnapping as part of her motivation to move to South Korea. My guess is that it was for legal reasons, but that is purely speculation.