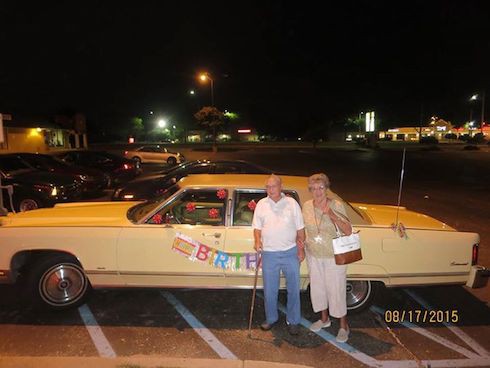 It’s Rehab Addict‘s Nicole Curtis’ birthday this week–and it’s also birthday week for her beloved grandfather, who just turned 90. If you’ve ever watched Rehab Addict or followed Nicole Curtis on social media, you know how close she is with her grandparents; they figure prominently in her updates, and have clearly been a huge part of her life for. So it’s not surprising that Curtis would want to do something special for Gramps’ 90th. Thanks to an unexpected discovery, she was indeed able to whip up a birthday surprise worthy of the age.

At first, the tweets Curtis sent out describing the situation were sweet, but pretty low-key:

As we quickly found out, though, there’s a bit more to the situation than there first appeared to be. Once the 90th birthday festivities had come and gone, Curtis took to Facebook to share the photo at the top of this post and explain why a ’76 Lincoln Continental is so important:

Kicking off my birthday week in style:) For as long as I can remember, my birthday (tomorrow) has been celebrated with my Gramps’ as his was the 17th-btw he turned 90. I happened to come across a 1976 Lincoln Continental same color as one he used to drive me around in. My wonderful friends drove to get it while we were at his birthday dinner and we had it waiting when he came out. He loved it and then immediately turned into Gramps mode-can you afford this? do you have insurance ?:):) All good. My Gram turned 90 last month -reminder she holds seniority over gramps 🙂

“Can you afford this? Do you have insurance?” That is classic Gramps Mode! For a classic Grandad car, to boot.

It’s not immediately clear whether Curtis bought the car specifically for her grandfather, or whether she intends to keep it and chauffeur him around every once in awhile. Given the tight bond the two share, though, it’s probably safe to assume that both of those scenarios are really the same thing 😉

A very happy birthday to Gramps–and to Nicole Curtis, who celebrates tomorrow!